Did you miss me? I got stuck in some January doldrums. I was also reviewing my Spanish language lessons, trying to get up to speed for Conversational Spanish 3 classes. Necesito estudiar mucho.

Here are new-ish network television shows I'm watching and enjoying. All six are either in the first or second seasons. I hope they all get renewed. (Or in the case of The Mayor, picked up by another outlet for another season.)

1. The Good Place on NBC

The Good Place makes me feel hopeful, without being preachy or self-righteous. I love the twists, turns and somersaults this wacky story takes. There are a few episodes that feel a bit slow, but stick with it. You'll be glad when the revelations roll in!


2. The Mayor, was on ABC, currently on Hulu

I'd vote for Courtney Rose for mayor. What a breath of fresh air this young man brings to city politics! Mayor Rose's heart guides him through a steep learning curve, as does his intelligent and driven advisor, Valentina Barella. I love this show! I can't believe ABC pulled it from the lineup so unceremoniously. Maybe some scandal involving one of the main actors or showrunners has yet to break and shed light on the situation, but I hope not. I hope Hulu makes a second season of this delightful show.

I like Jason Ritter's face. He portrays a flawed, likeable, bumbling guy trying to become a better person, and maybe save the world, one good deed at a time. I really want to see how this plays out. Yvette, his spiritual guide, is super-fun while providing a grounding force. She's figuring it out as she goes, wearing really great outfits along the way.

The cast of this show is awesome: Jermaine Fowler, Judd Hirsch, Katey Sagal, Maz Jobrani, David Koechner, Diane Guererro, Rell Battle. Each episode feels like a gentle social studies lesson in being a good human with plenty of laughs.

Chad and I got to see a live comedy set by Jermaine Fowler, and he is hilarious. Jermaine picked on Chad a bit for one of the jokes, and (of course) it made us love the set even more.

If you already like Big Bang Theory, then this show about the young, precocious Dr. Sheldon Cooper is a solid bet. Although I wasn't as smart as little Sheldon, I was definitely the odd duck in my family growing up, and I can so relate. All the actors on this show are fabulous, and I especially love Annie Potts as the sassy, meddling Meemaw. (Meemaw translates to grandmother for those of you unfamiliar with Southern vernacular.) 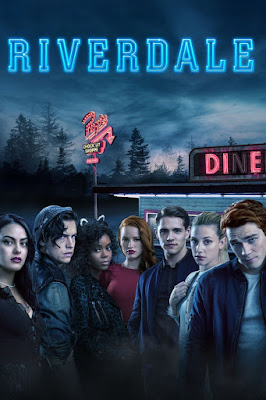 I feel ridiculous for watching this show, because it is so over the top melodramatic, and aimed at kids half my age. I love the lush, moody visuals of Riverdale. This darkly reimagined Archie comics world brought to life delivers sudsy soap opera style story lines. Everyone on the show is gorgeous. I might catch up on a few missed episodes later. It's a guilty-pleasure, for sure.