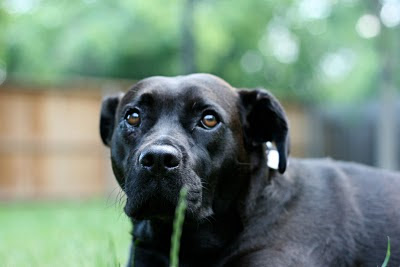 In no particular order, these are the things that cause Janie great concern:

Kites - the bigger, the scarier

Spray bottles - only when being sprayed near her

Any human under four-and-a-half feet tall

When someone has an apple, but doesn't share a few bites

When someone opens that cheese box (refrigerator), but doesn't give her a bite of cheese

When the kitties fight with each other - Janie checks out the fuss, but doesn't get involved.

When a kitty wants to come inside, but no one opens the door - Janie will alert Chad or me and lead us to the door.

Sonic - Sonic is our fourteen pound male cat. He hides around corners, then jumps out at Janie when she tries to pass. He puffs up his fur and hisses. It's very scary. Janie flinches and backs away, but then she wags her tale for some reason and acts excited. Maybe it makes Janie feel included when Sonic ambushes her since he also accosts Marigold and Kenji (our other two cats).

Baths - duh. It should be noted that Janie behaves well during baths. She stands very still and gets a far away look in her eyes as if she is meditating on her happy thoughts until the bathing ceases.

Love the One You're With


I admit it. I look at other houses sometimes. I'm a homeowner, but I'm not blind. I see houses that have professionally landscaped exteriors on quieter streets. I see houses that have fireplaces and interior laundry rooms. I can't afford most of those houses, so there's no harm in just looking, right? I mean, they're totally out of my league. They're probably so accustomed to the longing glances from strangers that they don't even notice anymore.

I love my 1952 house. As I painted over a few dings inside the house, and finally painted the new door and frames outside this weekend, I couldn't help but notice this sweet house's age spots. I saw the chipped wood trim, the cracks in the shingle facade, the uneven repairs on patchwork drywall in the corners of some rooms. I looked out over the too-big-for-me yard with its raggedy mix of bare dirt, grass and weeds that needs to be mowed again already. I fantasized of a day when I'll have just a small courtyard or patio to maintain with a posh garden home or modern condo.

My dream-abode is either brand new, or newly remodeled and move-in ready. It doesn't need to be bigger, but I'd like to trade-in one of the bedrooms for another bathroom and a laundry room that doesn't involve a trip out to the carport. Oh, and of course it has ample closets. I know some people go gaga for garages, but I'm attracted to a lighted, walk-in closet myself. Though I lust after this imagined future home, I haven't found it yet. If I do find it, who's to say that the timing will be right?

For now, I love this house. I still see all the traits that first drew me here. We've had some great times and made memories. We're attuned to each others' quirks and creaks. We're comfortable together. Sometimes that's enough.