Five Must-Do Items on my Apoca-list

I've been watching, and loving,  No Tomorrow on Netflix. The show's main premise revolves around one (very attractive) man's theory that a giant asteroid will destroy Earth in just over eight months. The two main characters each make lists of things they want to do before the asteroid induced apocalypse. These lists are cleverly called "apoca-list".

If I knew I only had eight months left on Earth, here are my top five apoca-list items:


I want to see the big cities and the small, quaint towns. I want to hit the tourist hotspots and see some sleepy green spaces. I want to sit in the pubs and let the locals talk at me. I want the full Irish experience for about ten days.

2. Move to the Pacific Northwest, preferably to Hood River, Oregon.


Don't get me wrong. I love Austin, my adopted hometown for the vast majority of my life. However, I don't love Austin's punishingly hot and dry summers. I prefer the rainy, temperate climate of the Pacific Northwest. I love hiking amongst tall trees and kayaking on calm freshwater lakes and rivers. I want to live somewhere that isn't so ridiculously crowded as Austin.


3. Spend as much time as possible with Chad and our pets. 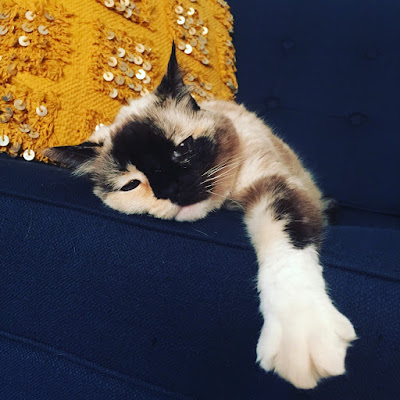 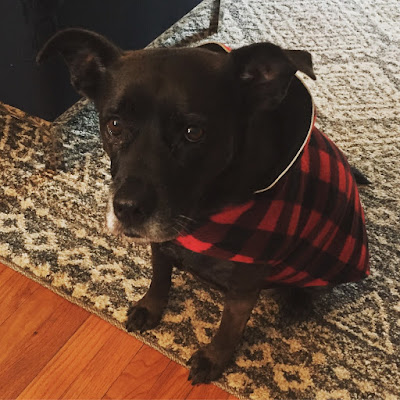 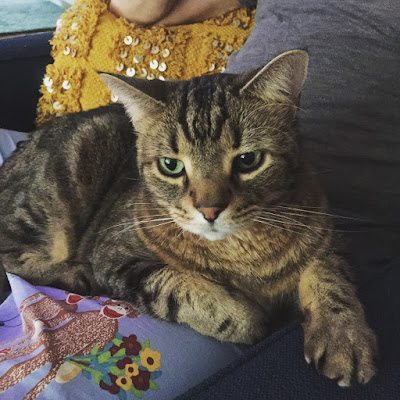 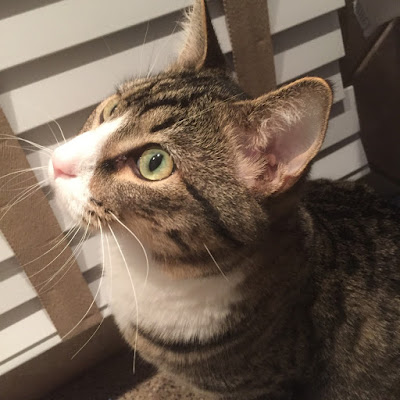 They are my favorite beings on the planet. Depending on which religious leader one asks, cats and dogs may or may not go to Heaven. So I need to enjoy the pets' company on Earth, just in case.


4. See the Perseid meteor shower one more time from a rural area.


In the U.S.A. peak viewing tends to be near mid-August. Chad and I saw the Perseid meteor shower one year while vacationing in Hood River, and it was amazing. With just our eyes (no telescopes), we saw many meteors trailing across the sky like giant sparklers.

Ever since my cursed peanut allergy reared its itchy, ugly head, I miss peanut butter real bad. If I knew I wouldn't be around to break out into hives, I'd totally enjoy some peanut butter at the last minute.


I had a difficult time coming up with five items, because I've enjoyed lots of different experiences in life so far. I'm no daredevil, but I try to do things often that scare me a little, or that challenge me. I've snorkeled in a cenote in Mexico, been in the front row of a Broadway show, worked to help cast a Broadway show, been all over Italy, toured London, sung in public (lots), done a backflip off the high dive, hiked to the top of Multnomah Falls, snowskied, waterskied, explored Manhattan by myself bravely, been in a one-woman show on stage, been a featured extra in an Emmy award winning television show, been a featured extra in an Emmy award winning HBO movie, created sidewalk-traffic-stopping window displays for retail stores, spent a few nights in a reportedly haunted hotel, and bottle-fed motherless kittens and puppies in the middle of the night. I'm proud of making the most of opportunities I've been privileged to have. I appreciate my experiences greatly.

My one big thing I still want to accomplish is to be a published author (beyond this blog, innumerable press releases and website marketing copy that I've written). This will certainly take more than eight months, which is why I didn't include it on my apoca-list.

What's on your apoca-list? What's keeping you from doing those things? 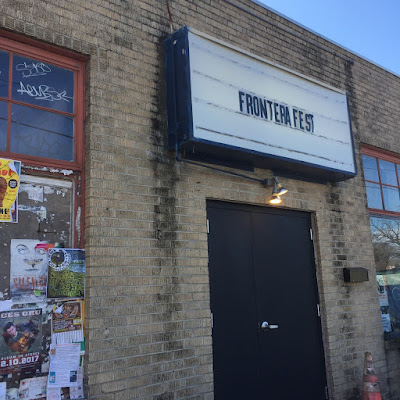 I usually participate in the short fringe, which is for plays that are 25 minutes or less in length. Each week of Fronterafest short fringe, up to 20 performances happen at Hyde Park Theatre with up to five different plays each night from Tuesday through Friday. Each Saturday of Fronterafest, the five "best of week" shows perform again. Four of the "best of week" shows are selected by a jury of judges with the fifth show selected by audience vote. At the end of four weeks, out of the up to 80 short performances, ten shows are selected by the jury of judges as the "best of fest". Each "best of fest" show performs twice more during the final festival week. There are also five "wild card" shows selected to perform once more during the final week of Fronterafest. The "wild card" shows are performances selected by the technical crew of Fronterafest as shows that they feel the jury of judges overlooked, and that deserve an encore performance. Incidentally, "wild-card" is usually my favorite night of the festival.

Thus far, I always perform shows written and directed by my super-talented friend, Max Langert. Max possesses a talent for ferreting out the absurdity in the mundanities of daily life. His shows typically have an element of surprise or simmering doom. Whether it's a bear attack at a picnic, a destructive meteor on the way, a stabby diner in a restaurant full of mean servers or a soulmate emerging from the audience to steal your heart, Max's shows keep the audience on their toes. 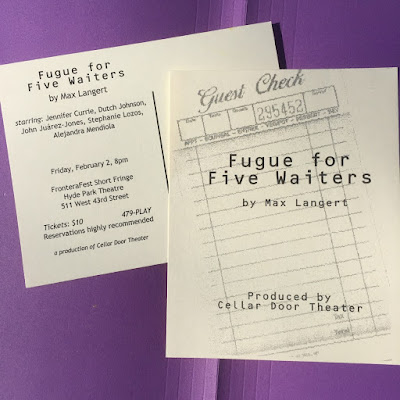 2001: I started performing at Fronterafest, back when I was practically an infant. Fugue for Five Waiters won best of fest. I got to work with a talented and diverse cast of five players. The experience was intense, emotional and fun, similar to my summer camp experiences as an adolescent. 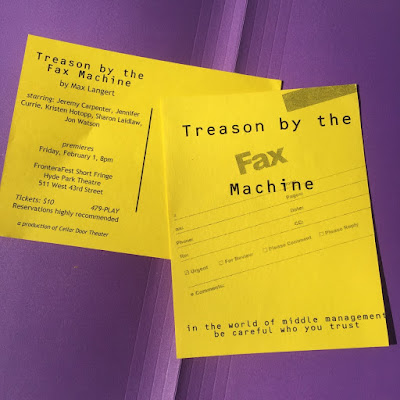 2002: Treason by the Fax Machine won best of fest. The title says it all in this tale of corporate hell. I got to work with another great cast.

Max moved back to New York City for a while. I was doing terrible murder mystery dinner theatre almost every week, sometimes a few times a week starting in 2002 and up through 2009. Around 2009, the Great Recession meant that people no longer spent $40 to $65 per person for dinner and a (usually lame) murder mystery show. Thankfully, Max moved back to Austin before the dinner mystery show work completely dried up.

2006: Because of My Beautiful Spirit was a one-woman show about a sweet, but unhinged lady searching for love and stalking her celebrity crush. I was on stage alone for eleven minutes spinning the tale. I'm proud of what Max wrote and of my performance. I guess it didn't resonate, because there was just the one performance. No best of week, much less best of fest. It stung a bit. I felt like I let Max down. Chad was busy traveling for work and unable to see this show that happened only once. I made the mistake of assuming that past performance indicated future performance. The other shows I did made best of fest, so this one should too. Yeah, not so much. 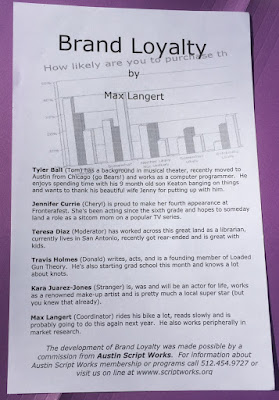 2007: Brand Loyalty won best of fest. This show featured a focus group study gone very, very wrong. We were back! 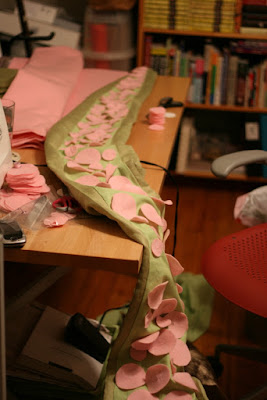 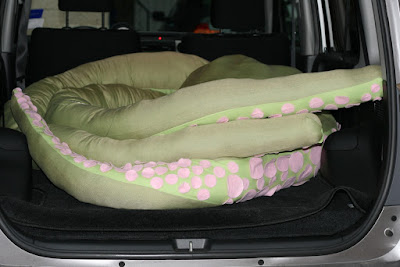 2008: You're Happier Than You Think: Recalibrating Your Emotional Scale was a long fringe show. Long fringe shows are allowed to be up to 90 minutes in length, and are panel-jury selected for production. We were guaranteed four performances. I made a giant squid for this show that was set on a cruise ship. The giant squid served as that signature-Max embodiment of the simmering danger. Another actress and I had to run outside off-stage near the end of each show and douse ourselves with a bucket of cold water to look as if we'd fallen off of the ship. All performances were in late January with most of our shows happening at night, so it was pretty flipping cold. This show was at the Blue Theatre which is sadly no longer around.

I went off for a few years to pursue television and film work. Max kept making theatre, some of which I was delighted to see. 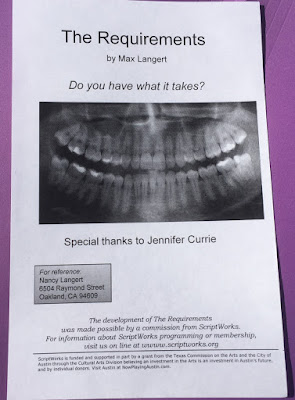 2012: The Requirements won best of fest. I emerged from the audience as Max gave a PowerPoint presentation on his requirements for a relationship partner. Ultimately, my character got rejected by Max's character for not reading The Economist. The audience loved the surprise and absurdity.

I went off for a few years to work in retail visuals and merchandising. My work schedule was punishing. Max was still making theatre. I still made time for a few dinner mystery shows, because they paid well, but my heart wasn't in it. 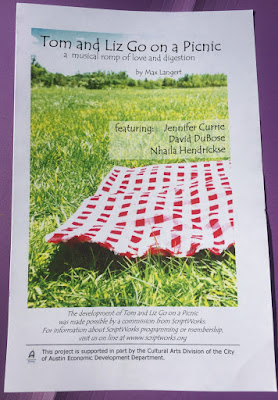 2015: Tom and Liz Go on a Picnic was a musical about a treacherous love triangle that featured a bear attack. We won best of week, but not best of fest. Working on this show coincided with a soul-sucking day job. I'm so glad I had a creative outlet to alleviate some of my day job misery.

2016: Reasons You Should Stay was another one of Max's PowerPoint presentation shows with not one, not two, but three people popping out of the audience as Max's  character's disgruntled ex-lovers. I thought this show was so fun, but, um... we had just the one performance. 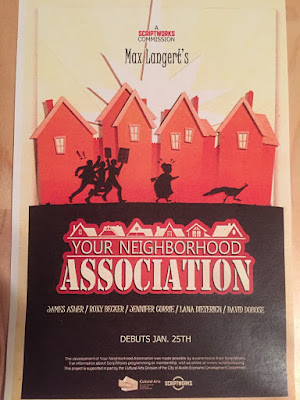 2017: Your Neighborhood Association won best of fest! This show is ripped straight from your neighborhood listserv with peacocks, property assessments, parking spots, broken washing machines and a destructive meteor headed straight for your block. I'm honored to work with a talented cast. Our final performance is tonight to a sold-out house.

Whatever your creative outlet may be, keep doing it! If you've stepped away from creative endeavors for a while, come back!

I currently identify as mostly vegan/strictly vegetarian. Even if you aren't yourself vegetarian or vegan, please read on so that you can better accommodate the restaurant-choice-buzzkill vegetarians and vegans in your life.

Via 313 serves genuine Detroit-style square, deep-dish, hearty "The Marinara" pizza (no cheese/vegan) which makes me do a happy dance every time I have it. Via 313 also offers a house salad and roasted broccoli & cauliflower that happen to be vegan and delicious. Via 313 is great for dining out or carrying out with omnivore friends.

Favorite dishes at Mr. Natural include the Potato Flautas and the Mr. Natural Burger. Mr. Natural also serves some of the best vegan baked treats I've ever had. I would not bring my omnivore friends here, because the ambiance is a little lacking, and it might be a bit funky for the uninitiated. That said, I'm thankful for Mr. Natural blazing a trail as one of the old guard vegetarian restaurants in Austin.

Guero's offers a separate vegan menu that you can request at the host stand. Chad and I love everything from that menu, and return often. I love that this definitively-Austin institution on South Congress Avenue embraces vegan diners. We can go here with omnivore friends, and keep everyone happy. Guero's is my perfect dining destination for atmosphere, great food and drinks. 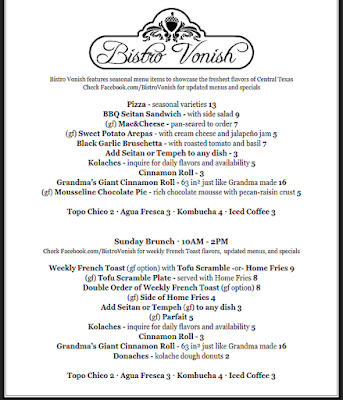 Bistro Vonish is elevated vegan cuisine served from a trailer to tables under a large event tent strung with lovely bistro lights. On cold nights, a fire pit offers some warmth. On hot days or nights, large oscillating fans on stands offer some relief. Everything Chad and I have eaten here is really delicious and served with a perfect balance of flavors, textures and visual-appeal. I especially like the butternut squash hushpuppies (seasonal), the BBQ seitan sandwich,  and the french toast with home fries and a side of seitan available at brunch time on Sundays. Bistro Vonish is my favorite all vegan restaurant in town. I hope Chef Craig is able to transition to a brick and mortar restaurant sometime in the near future.

This place is expensive, almost always crowded and almost always deafeningly loud. The food is great though. The crowds and noise are the price of popularity. Chad and I have been here with omnivore friends who reported that they loved the food. As indicated by the name, there are also an impressive number and variety of beers on tap.