my cozy house and the completion of immediate house projects.

reconnecting with old friends - like Kristen M. who had us over for an amazing Thanksgiving potluck dinner.

new friends - who are fun, and a source of comfort and support.

the past two years working as a Furry Godmother pet sitter. I've met so many wonderful pets and people. I've also had a peek at how other people decorate and arrange their houses, which sparked many ideas for my own house.

holidays off from working in 2007 as I part ways very amicably with Furry Godmothers.

time off from working starting in January to be with my mom and my sister and her family. I miss my dad. I know that they do too.

the prospect of new adventures. Losing my dad last month reminds me that I must actively seek to make the most of every day.
Posted by Jenn C. at 11:02 PM


The interlocking pavers driveway and walkway were completed on Friday morning, November 17! The old driveway was a sad mix of sand and pebbles that sat three inches lower than the concrete carport pad. The old walkway resembled a jigsaw puzzle, not too safe for actual walking as the puzzle pieces shifted precariously with each step. 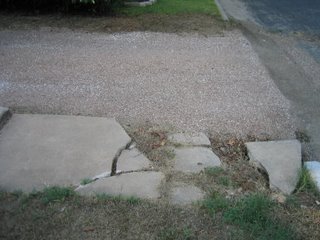 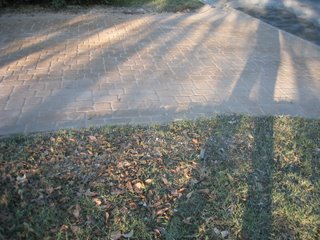 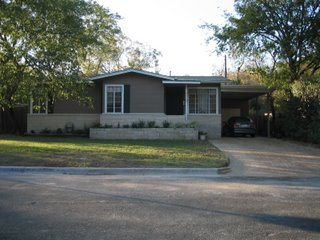 After: So pretty. So functional.

On Saturday, November 18, we had our big housewarming party. We wanted it to be six months after we bought the house. Our theory was that having the party would force us to finish painting and updating the house. The timing worked out pretty well. 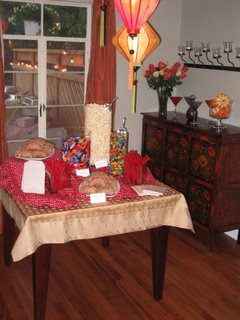 The "candy bar" featured kettle corn, M&Ms, twizzlers, fried apple pies and packaged candy bars. It was a hit! We sent fried pies home with lots of people. Mmm... pie makes a delicious but not very nutritious breakfast for the day after a party. 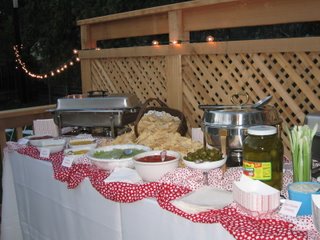 We went with a fall carnival theme. We had pickles, corn dogs with fancy mustards (yes, I loathe corn dogs, but our guests loved them), nacho fixings, boneless buffalo wings with celery and blue cheese on the buffet spread on the deck. As one friend put it, "the food was spectacular. It was like going to the fair without smelling livestock and worrying about your car getting vandalized." 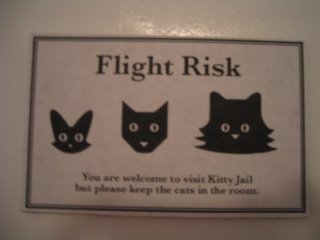 Chad made funny signs for various doors. This was the sign for the kitty jail / guest room. 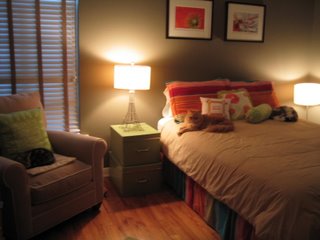 The kitty jail. If you look closely, you can see furry lumps: Marigold and Kenji on either side of the bed & Sonic on the chair. 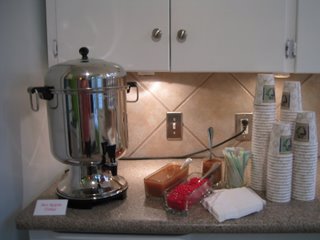 Hot cider with caramel, red hots & cinnamon to mix in. Yum! The idea for hot cider came to me during a manic, Martha Stewart-like episode at the HEB grocery store. I almost made little caramel apple wedges with nuts as garnish for the punch, but I called Chad and told him I needed him to talk me down. Thus no caramel apple wedges with nuts, but I did keep (what's left of) my sanity. 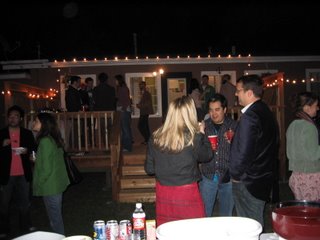 Proof that we have friends. It was so much fun. We have lots of soda, juice boxes and cider leftover to get us through the year! We managed to give away the leftover corndogs luckily.

I'm so happy that all of our immediate house projects are done! I look forward to some serious lounging in our cozy, cute house.
Posted by Jenn C. at 3:42 PM Chad busted bootie to get the faux-tin-tile ceilings in the kitchen and bathroom painted this weekend. They look fabulous and hide the cracks. I guess I'll forgive Chad for keeping me up so late Saturday night with his tromping up & down the squeaky step ladder, paint-brushing and general project noise. Yep, we have some wild and crazy weekends here! (See earlier post titled, "New Homeowners Are Boring.") 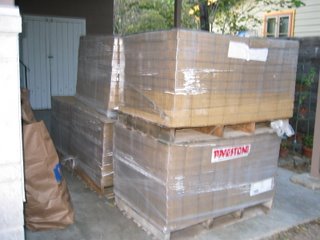 The interlocking paver stones arrived for our new driveway and walkway. Hopefully that project will be done by this weekend in time for the big housewarming party! 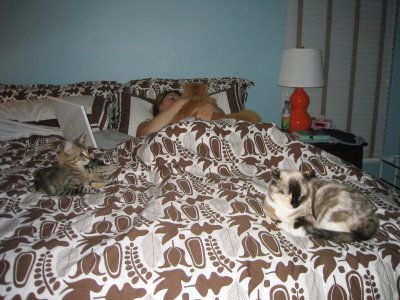 Our kitties love to snuggle. Marigold is at the head of the bed with me, Sonic is in the middle-left and Kenji is at the foot of the bed. The newest feline family member, Sonic, was supposed to be a foster kitty. Of course, Chad & I are smitten with the kitten and are keeping him, rather than adopting him out to someone else. Yes, yes, everyone knew that would happen!
Posted by Jenn C. at 4:43 PM 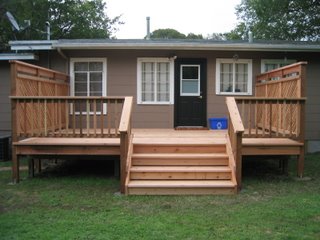 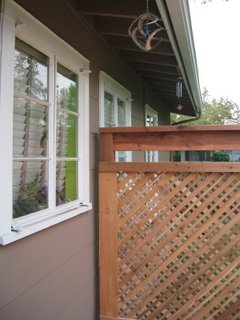 We have a deck! It only took the pros two days to build it. Love it! Love the privacy screen on both sides too. Add "buy deck furniture" to the to-do list.