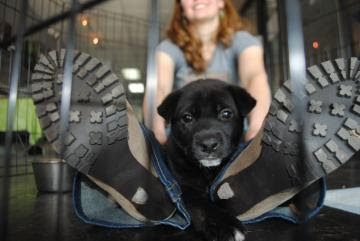 I spent part of last Saturday volunteering at Austin Pets Alive Tarrytown. It's a tough job, snuggling puppies and kitties. Oh yeah, and greeting the human visitors.
This puppy is Jett. He's a Catahoula-mix. I love him, but explained to him about the overcrowding sitch at the 1952 House. He's gonna find a great home... with someone else.
Posted by Jenn C. at 2:32 AM

Chad and I hosted the BEST weekend guests ever at the 1952 House Saturday night and part of Sunday: kittens! We babysat the little fuzzy sugarplums while their foster-mom partook in some holiday cheer. Honestly, the kittens were holiday cheer for me.
At 25 days old, the babies eat every three hours during the day and can go up to six hours overnight between feedings. Totally worth the slightly out-of-ordinary schedule: Mouse, Moonpie and Magee were great little eaters.
Kenji and Sonic (resident cranky cats at the 1952 House) didn't like the kittens much, but Marigold (old lady Persian cat) and Janie (just the best dog ever) expressed respectful fascination with the babies. Let the squee-ing begin! 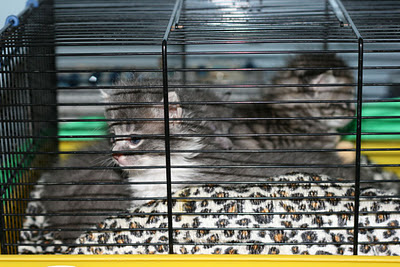 Our guests fit into a tiny hamster cage! 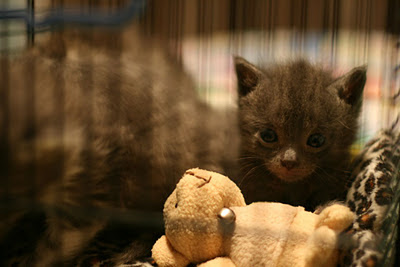 Moonpie lounging with his tiny Teddy-bear. 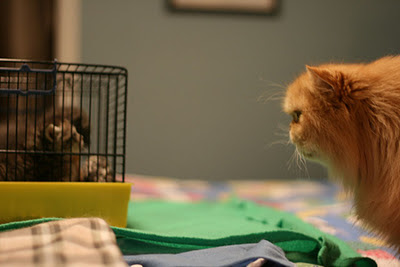 
Learning a new script for a role/show I haven't done before is stressful. I try to pretend it isn't. Pretending doesn't work. Procrastinating also doesn't work.
Tonight I did a new show in San Antonio for a private party. All week I worked on the character and memorized lines. I assembled my costume including lots of accessories and a borrowed wig. I researched our client and the historic hotel which hosted our show, so I could throw in references to personalize the script.
I drove in Friday afternoon traffic for over two-and-a-half hours on rain-soaked roads with fellow actors who don't know the meaning of "use your indoor voice". Yes, white-knuckled the whole way.
The show itself was so much fun to perform. The audience thoroughly enjoyed it, and participated enthusiastically where they should. Several people approached me after the show to offer compliments -- always a welcome bonus to the paycheck!
Despite my ringing ears and headache from being trapped in a car with my fellow actors for over four hours today, I guess it was worth it. (And, yes, we made much better time on the return trip.)
Now that I have this "first" of playing a new role under my belt, I can sleep easier, breathe a sigh of relief and start reading a new book. *sigh* Now where is my favorite bookmark? You know, the one shaped like a kitten?
Posted by Jenn C. at 2:33 AM