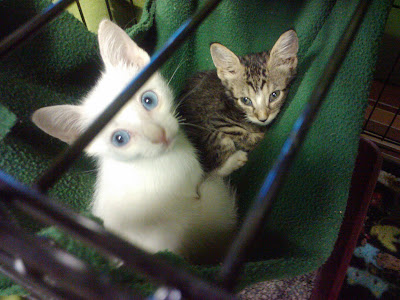 Volunteering at the Bottle Baby Nursery for Austin Pets Alive poses challenges for sure: avoiding getting ringworm while making sure the kittens affected get plenty of food and love; suffering through the very few kittens who just don't make it; washing dirty bottles and dishes by hand - just like at home; finding occasional fleas; finding occasional worms (shudder); kittens with the equivalent of diaper rash; and sometimes the sheer volume of hungry kittens EEEEEEEEE-ing at me to be fed right now!

The rewards of caring for these helpless feline orphans far outweigh any challenging situations. I love: the twitch of kitten ears as they suckle happily from a bottle of Kitten Milk Replacement; hearing tiny purrs; watching strong kittens romp and play with each other; seeing fat kitten bellies; watching kittens who recover from various maladies at the nursery flourish into beautiful, healthy, adoptable kitties; squee-ing over all the cuteness; petting soft baby fur; burping kittens after their bottle; and the most rewarding of all, knowing that I help to save kittens from being killed at the shelter simply because they are too small for round-the-clock care at the understaffed, limited resources, city-run shelter.

While I do love kittens very, very much, please spay and neuter your pets to prevent pet overpopulation and the subsequent killing of pets. Encourage your friends and family to spay and neuter their pets. Adopt your next pet from a shelter or rescue group. Say no to disreputable breeders.


I met with our favorite handyman this morning to consult on the possibility of installing an automatic dishwasher in the 1952 House. Sure. We can have a dishwasher. Installing the dishwasher will involve completely ripping out the kitchen cabinets - upper and lower, removing the counter top and backsplash, rewiring all the electrical work in the kitchen, installing a kitchen disposal, and possibly replacing two windows and moving the back door. Did I mention that our charming 1952 House features layers of lead paint and has asbestos shingles on the exterior which will require special hazardous materials allowances?

Um... no thanks. I don't have an extra $20,000 (or more) sitting around to do that just now. I also don't want to deal with the three-month (if we're lucky) dustbowl of a complete kitchen remodel at this juncture.

I'll just get the oven fixed for now. (Assuming that the oven can be fixed - fingers crossed!) That will be plenty fancy. When I'm feeling super-ambitious, I'll repaint the walls in the kitchen. Super-fancy!


These hives flair and recede at will. I have new bumps on my wrists and the front of my hands. The bumps on my arms come and go with no discernible rhyme or reason. The backs of my knees and my earlobes still itch from invisible, phantom hives.

Overall, the hives are less itchy and less prevalent than they were at the peak of my allergic reaction to nine doses of Cipro. I am still drained of energy after the gradual step-down dosing of steroids. There is a scared, hysterical, irrational part of me that feels like I will never be normal again. My rational inner voice tries to reassure that drugs can stay in one's system for weeks, and that this too shall pass.

Meanwhile, I haven't been to the gym for three weeks. (Gasp!) I did lots of volunteer work while on the steroids - close to twenty hours in one week. Post-steroids, I logged only four hours volunteering this week. I did a dinner theatre show where my old-lady romance writer costume mercifully covered most of my bumpy, irritated skin. Post-show, I slept for nearly twelve hours.

This is not fun. I'm ready to be healthy again, please.


I took my last steroid pill yesterday morning. I'm still a bit itchy, but the hives are slowly leaving.

Just say no to drugs, kids! Especially if you're allergic to them.

I'm now experiencing the post-steroid crash. I've been sleeping and then sleeping some more. I've been having strange dreams too. I'm a bit achy all over as if I have the flu, but it's a tired ache; not an exertion ache.

The past three weeks have not been fun between the original bacterial infection, the allergic reaction to the medication, the steroid rush, and now, the post-steroid crash.

I look forward to being healthy and presentable (hive-free) soon!


I'm on steroids, and wow!, am I getting a lot done! The house is sparkling clean!

Don't report me to the authorities. I have a prescription. My hives are slowly shrinking and getting less itchy in response to these wonderful steroids. The only downsides are that I feel like my head is vibrating, it's hard to sleep and I have a little heartburn. Small prices to pay to be free from the hideous hives and their relentless itchiness!


Raspberry, the kitten, and one of her siblings, Rigatoni, have moved on to Kitty Heaven. I'm sad that they fought to breathe for many days, but ultimately didn't make it. I take a tiny comfort in knowing that they aren't in pain or distress anymore. Their other four siblings are gaining weight and nursing from their mama-cat now. I hope the other four kittens grow up to be healthy cats in fantastic forever-homes. Their sweet mom, Emma, also deserves a great home. She's been so nice to all of us at the Bottle Baby Trailer as we handle her babies and shuffle her in and out of the saline-mist-tent.

On the bright side, I got to feed lots of adorable, healthy kittens at the Bottle Baby Trailer this afternoon. Purr...

My rash (from taking nine doses of a medication to which I'm apparently very allergic) continues to worsen. There are hives all over me: on my legs, on my arms, on my tummy, on my back, on my posterior, in my ears, on my scalp, in my nostrils and possibly in my throat judging from a suspicious tickle and mild cough. Hopefully when I see the doctor tomorrow, he can give me something to make this better. Come on, Cortisone shot!

Tonight at the Bottle Baby Trailer, little Raspberry struggles to breathe. Weighing just 180 grams, this tiny kitten has a respiratory infection. The fine volunteers for Austin Pets Alive (myself included) are doing all we can to help this little fuzzy soul: using a baby aspirator to suck goo out of her nostrils, putting her in a tent with a nebulizer of saline solution, feeding her Kitten Milk Replacement with a dropper. I had the midnight to 2:00 AM shift, and hated to leave for fear that she'll stop breathing; not that I could do anything more than I did to help her. I hope that the volunteer going in at 8:00 AM finds Raspberry breathing and well-rested, along with her other five siblings and her mom, Emma.
Posted by Jenn C. at 2:00 AM


Last week I went to fill a prescription for Cipro to treat a suspected bacterial infection. The pharmacist, who was sporting a mesmerizing, sparkly, orange manicure, asked if I knew if I had any drug allergies. Nope. Got my Cipro and started taking it as directed Thursday evening.

Friday morning I awoke to find a few itchy bumps on my elbow. Fearful that I might have contracted ringworm (despite taking many precautions) from feeding tiny baby kittens at the Bottle Baby Trailer for Austin Pets Alive, I had Chad inspect the bumps. Chad has no medical training, but has seen people who have ringworm. Nurse Chad said that the bumps appeared to be little bug bites.

Saturday morning I found a few bumps on my knee.

Sunday morning I found a bump on my wrist.

Monday I spent three hours on the road to and from San Antonio for a commercial shoot that lasted fifteen hours. As Monday progressed into the wee hours of Tuesday, I felt itchier and itchier, with bumps multiplying seemingly exponentially. When I finally arrived home at 3:00 AM Tuesday, I took my Cipro with a tragically unhealthy dinner of a giant cinnamon roll and a glass of milk. I also decided that maybe I should read the three page warning document that came with my Cipro prescription. Guess what? Some people have severe allergic reactions to Cipro expressed in many forms including rash and hives.

Tuesday morning, while I got some much-needed shut-eye, Nurse Chad scheduled my doctor's appointment. He drove me to the doctor where we confirmed that I am very likely allergic to Cipro and that I do not have ringworm.

Now I'm drinking lots of water in attempts and flush out the Cipro. I'm taking oatmeal baths, swallowing the maximum recommended doses of Benadryl and trying to sleep so I can heal.