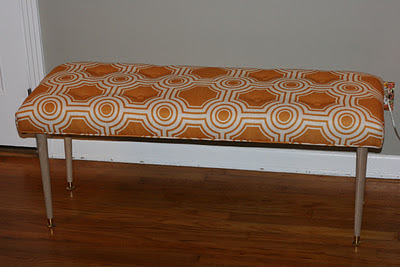 Friday I took a super-fun furniture upholstery class at Spruce here in Austin. The result is this lovely bench. I got the fabric at Fanny's Fabrics on South Lamar on sale for a steal! The bench will spend its days in Chad's fancy new office. 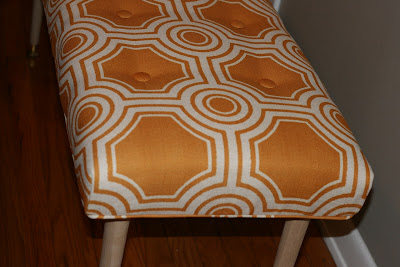 Lenten Vegan & the Circle of Judgement


I'm a vegetarian. I love cuddly critters. It's hard for me to look at animals and draw a line between "let's be friends" and "you are food".
What a person chooses to put into or onto their body is a very personal decision. I don't presume to preach to anyone that they should be a vegetarian based on my personal beliefs. However, I've been on the receiving end of many tirades about how I should not eat eggs (not even free-range, organic eggs) or dairy products (not even ethically raised, humanely harvested, organic milk or cheese). I've also read reports about reduction of honeybee populations and mysterious honey shortages.
Lent starts with Ash Wednesday on February 22 this year. For forty days through Easter on April 8, I will go vegan. Vegans abstain from using or consuming products that contain animals or animal byproducts. Personally, the hardest part for me will be avoiding honey and beeswax. I'll have to give up honey in my tea and my favorite beeswax lip balms. Luckily, most of my bath and cosmetic products are already vegan. I'll miss cheese and milk, but will experiment with nut cheeses, soy cheeses, almond milk and coconut milk. (I already know I loathe soy milk. Ick.)
Living in Austin, vegan options at restaurants, bakeries, ice cream shops, grocery stores and cosmetic sections abound. I'll enjoy exploring the plethora of products. If I have to travel during Lent, it may be tough to find vegan food, but I'll plan ahead.
I'm not throwing out my wool, cashmere or leather that I already own. I stopped buying leather a few years ago, reasoning that the pigs and cows die for that leather. However, I still have leather shoes, bags and belts purchased many years ago. Little baby lambs die to make shearling, so none of that in my possession! I still buy cashmere and wool, because the sheep and goats are shaved, not killed. Admittedly I should do more research on whether the woolly-beasts enjoy good living conditions. I won't purchase any new animal byproducts during Lent. If you stumble upon a cashmere sale of epic proportions, I do NOT want to know!
Will I remain a vegan after Lent? Maybe... but I'll likely go back to being lazy vegetarian who enjoys dairy products and cashmere socks. Don't judge, please.
Chad is going vegetarian for Lent this year. I'm proud of him, and ready to support him. I'll also reserve judgement when Lent ends.
Posted by Jenn C. at 10:51 PM

Yeah, yeah. I don't pay to watch you work, but some of you have actually asked me about upcoming public shows. Here's your chance to catch me at work.
Wednesday, January 25 at 8:00 PM
Fronterafest Short Fringe at Hyde Park Theatre
The Requirements by Max Langert
Tickets available at Hyde Park Theatre's website.
Fronterafest Short Fringe runs like a round robin tournament. If the judges, audience and/or technical theatre crew like us, you may be able to catch the show again. 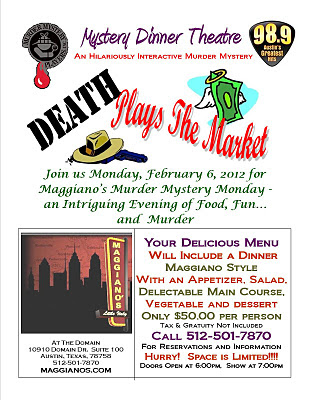 Monday, February 6 at 7:00 PM
Murder Mystery Players at Maggiano's in the Domain
Death Plays the Market: It doesn't pay to be the accountant to a wealthy couple on October 29, 1929. Fabulous vintage costumes make this show extra fun!
Call 512-501-7870 for reservations!
Posted by Jenn C. at 8:02 PM

Retail (can be) Hell

Chad agreed to hosting more kittens at the 1952 House for a few days while their regular foster-mom travels for work. Meet Minnie, Melia and Matthew! They are shy wee beasties, but very playful.
Posted by Jenn C. at 11:32 PM

1. Drink more! (water.)
2. Defy gravity! (with regular trips to the gym.)
3. Continue to volunteer! (because the pay is amazing.)
4. Visit a foreign country I haven't been to yet. (Front runner is Ireland.)
5. Celebrate my 30th birthday in style! (and not admit my real age unless under oath.)
Posted by Jenn C. at 1:46 AM