When fairly heavy rains put the brakes on plans to visit Cheekwood Botanical Garden and Museum of Art, we decided to catch an uber ride to The Nashville Farmer's Market instead, which is mostly covered or enclosed.

The majority of fresh produce vendors are not at the farmer's market on weekdays it seemed, but the Market House Restaurants and Shops building was packed with lunch crowds. After perusing all of the many and varied food court vendors, we chose Village Bakery & Provisions for a shared grilled brie and peach sandwich on freshly baked bread with a lemon eclair. Yum! There was a bit of confusion when we were waiting for our sandwich. The baker walked up to the front counter and mumbled something and handed me a hot from the oven, large loaf of bread. I smiled brightly, said something like, "Thanks. Wow, still so warm." I had no idea why the baker handed me the bread or what he said. Then he came back a moment later and told me it was pugliese bread. I repeated, "pugliese? Thanks." Then I tried to pay the cashier for the bread, still confused, but trying to act like I knew what was happening. The cashier smiled and said, "He GAVE that to you." I replied, "Oh! So sweet! Thank you!" I have no idea what the baker initially said or why he gifted me bread, but it was delicious! Also I am awkward sometimes.

Too often Chad and I do more during a vacation week than other people do during a work week. We're not people who relax easily, both fueled by varying combinations of anxiety, caffeine, ambition, fear or missing out and wanderlust. It is actually odd for either of us to spend multiple hours unstructured or unplanned on vacation, but that's what we did before heading back out to meet our dinner date for the evening. There was a good bit of staring at our respective phones, reading fiction and general laziness. Someday I will have a vacation where I spend the majority of time relaxing and being lazy. Dare to dream!

Our dinner date and local host for the evening was Ed, another of Chad's high school friends. We met up with Ed in the long line outside of Hattie B's Hot Chicken. As a buzzkill vegetarian who tries really hard not to judge while other people eat meat, I did not partake in the hot chicken. Apparently the chicken is fried and spicy. I did enjoy some macaroni and pimento cheese, people watching and eavesdropping. 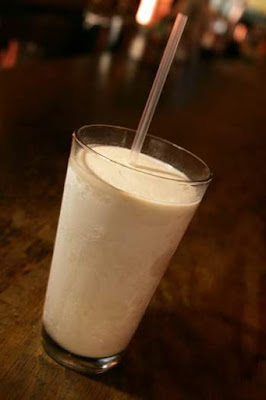 After dinner, we crossed the street to the Broadway Brewhouse for a very adult milkshake called a bushwacker which featured approximately eight different liquors. Delicious and dangerous! Perhaps the drink also served as liquid courage for our next stop: The Big Bang Dueling Pianos Bar in the heart of Broadway's Music Row. I've often been accused of seeming aloof or too cool for school, but this was not the case in the middle of a silly-fun sing-along at the dueling pianos show. The musicians totally engaged with the audience and seemed like they were having a great time, which made the audience have a great time. They performed modern songs such as "Shut Up and Dance" by Walk the Moon and "Shake it Off" by Taylor Swift. One of the musicians started a funny game where he pointed out that a $2 tip prompted a Taylor Swift song, but that for $3 he would play a different song without missing a beat, which he did while the other musician suggested that a $4 tip would start the Taylor Swift song back up where they left off, which we also got to witness. This was likely a bit they had done before, but it seemed impromptu and super-fun. They also performed an awesome medley of Beatles songs courtesy of a $100 tip/request from an audience member. We stayed for about two hours, and I sported a huge grin the entire time. Let it be noted that I also joined hands and swayed to the chorus when instructed to do so during the Neil Diamond song "Sweet Caroline". In summary, I was neither aloof nor cool.

Ed had to be at work in the morning, so we didn't stay out late. Chad and I had to check out of our loft and be at the rental car pickup for our drive to Louisville the next morning too. We loved seeing friends in Nashville, having locals show us around and make suggestions. Nashville is truly charming, but we wouldn't have felt so welcome without our friends there.

Check back soon for harrowing tales of driving I65 to lovely Louisville.