Five Things to Make Me Return to NYC

My sister told me this week that she plans to take her three oldest (of seven) children to New York City this year. She asked me for recommendations of things to see and do with the kiddos. Despite spending quite a bit of time in Manhattan during my husband's advertising career days, there are things that I never got around to doing in Manhattan. If I were to return today, here are five things that I would experience post haste.


The High Line is a 1.45 mile long New York City linear park built in Manhattan on an elevated section of no longer used train track called the West Side Line. On my past trips to New York City, the most recent of which was in April of 2010, The High Line was a mere babe with only a small portion of it open. It wasn't on my radar. With the growing expansion of The High Line over the past several years, this is certainly on my must-experience list.


2. See the Statue of Liberty as viewed from the Staten Island Ferry

On past trips to New York City, without fail, the weather did not cooperate with plans to take the Staten Island Ferry past the Statue of Liberty. This is still on my to-do list. I imagine that late spring or early fall is the best time to take advantage of this photo-opportunity with Lady Liberty. Avoid sharknado season.


Typically on view from Thanksgiving through New Year's Day, I'd love to take a walking tour of these magical retail portals know as holiday windows. I worked in retail visuals for J.Crew, west elm and Brooks Brothers over the years. I loved creating the holiday windows and displays more than any other time of year. And, yes, I totally watched Window Warriors on GSN, in which window dressers competed to create the best window displays.


Despite walking the plaza many times, I never made it to the top of the Rockefeller Center. Clearly, I lacked some ambition and/or was trying too hard to not seem like a tourist.

Annually debuting the first Monday in May with the highly photographed Met Gala and running through early September, the theme of this fashion meets art exhibit changes annually. The 2016 theme was Manus x Machina: Fashion in an Age of Technology. The 2017 theme, just announced, is Comme de Garcons. As a mere mortal, I naturally won't attend the Met Gala, but I will view photos of the fabulous affair online. I'd love to see the exhibition while it is open to the public.

Upon review, I'll likely have to make multiple trips back to Manhattan in multiple seasons to knock out this list. That's the great and mercurial thing about a vibrant city (and life in general): nothing stays the same for long. Enjoy moments when you can catch them.

Last Friday city crews worked on completing the pipe replacement project under our street and interrupted the water supply for the 1952 House for eight hours. We knew ahead of time that our water supply would be turned off. We were able to make sure that the brita water filter pitcher was full and that the pets' water bowls were full before the water service disruption. We used water from our rain barrel carried into the house by the bucketful to flush the toilet. It was less than convenient, but a mercifully temporary issue. As the water level in the brita pitcher dropped, and as trips out into the freezing cold weather to the rain barrel for toilet water grew wearisome, we appreciated the imminent restored water flow.

Many of us take clean water and flushing toilets for granted. File "clean water" under things for which we should constantly express gratitude. Here are five clean water causes that I invite you to consider and possibly support.

As always, click on images to enlarge them, and roll your cursor over text to see links.

1. charity:water  is a nonprofit organization bringing clean and safe drinking water to people in developing countries. You can simply donate and/or you can shop stylish items that donate profits to the cause. I may need that Votivo candle and a few t-shirts. 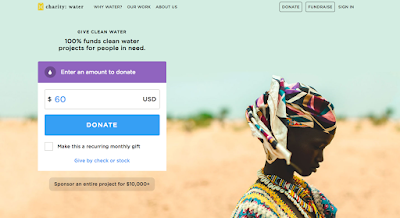 2. WATER is LIFE.'s mission is to provide clean water, sanitation and hygiene programs. The PSA video "#FirstWorldProblems aren't real problems" is sobering. You may choose to donate to a specific project or to the cause at large.

3. water.org was co-founded by Matt Damon (yes, that Matt Damon) and Gary White to get safe water and sanitation to millions of people all over the world. From their website:

4. Columbia Water Center's mission is to creatively tackle water challenges of a rapidly changing world where water and climate interact with food, energy, ecosystems and urbanization. These smartypants researchers, scientists and engineers sound like a good bunch.

5. Water For People 's mission is to create long-lasting water and sanitation infrastructure by talking to local community members, governments, and business owners, to find out how they live and what they need to feel healthy, safe, empowered, and successful. From their website:

Dottie from the Block


Dottie showed up on our street in early to mid September. She is so charming and sweet that at least four different households were feeding her and caring for her. It became clear that she was a well-socialized cat when she repeatedly tried to run into different neighbors’ houses. A Good Samaritan took her to Austin Animal Center, thinking that she would find her owner there or get adopted. Dottie was not claimed during the 72 hour hold period. Under a new program at Austin Animal Center, she was spayed, vaccinated, had her ear tipped, and was returned to our street in mid-October.

Our street is under major road construction right now with a lot of heavy machinery moving around all day. Neighbors and I were worried about Dottie getting run over, or encountering a coyote as we are very near a long creek where coyotes roam. All the neighbors caring for her, myself included, have too many pets already to keep her. Neighbors suspect that Dottie was abandoned after a wave of five different houses on our short street turned over renters/owners. I hate to think that, because she is so sweet and affectionate. I posted “found cat” on three different Facebook groups for lost & found pets in Austin and on Nextdoor for South Allandale. I let Austin Animal Center know I had the cat (identifying her with her A identification number from the program) and posted to their “found” files. I put flyers all over our neighborhood, at five area vet offices and at three pet supply stores. No one claimed this super-sweet, social cat.

She has lived inside the 1952 House since October 21. Dottie loves to curl up in a warm lap to watch Netflix, especially old episodes of Friends. She is very playful and enjoys chasing a ribbon toy or the red dot of a laser pointer. Dottie can be a bit naughty sometimes. She likes to jump into unattended drawers or cabinets, and rearrange the contents. It’s pretty cute even as she plunders your sock drawer.  She is a connoisseur of boxes: if she fits, she sits. Dottie might like a mellow canine roommate, but she does not like other cats. She will thrive in a home with older children or adults. She is spayed and vaccinated. Dottie uses the litter box every time like a pro. She will curl up on the bed next to you to sleep.

Chad and I love Dottie. We already have three cats, two of whom Dottie dislikes intensely, and a big dog, in whom Dottie expresses polite interest. We can't keep her. Dottie is getting very lonely living in our extra room all by herself twenty-one hours a day. I can only spare so many hours a day to hang out with her.

Dottie will enter Austin Animal Center on January 20 for adoption, unless I can find a great home for her first. I've tried lots of other venues including Facebook, Austin Pets Alive's Positive Alternatives to Shelter Surrender program which referred us to Austin Animal Center, Austin Humane Society's adoption program which said Dottie is not a good fit for their busy shelter due to her dislike of other cats, Twitter, Instagram and word of mouth. I'm posting sweet Dottie to the blog again. If you live in the Austin area and might be interested in adopting Dottie, please leave a comment. Please share if you think a friend or family member in the Austin area might be interested in adopting Dottie.