Another Reason I Love Half Price Books 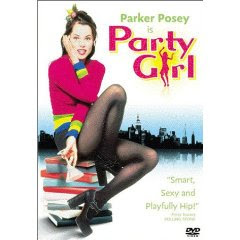 Most trips to the Half Price Books store on North Lamar Blvd at Koenig yield gems such as vintage Nancy Drew books, reduced price chick-lit books, quirky stationary or cash. (I sell our old video games, books, DVDs and CDs there.)

Yesterday low blood-sugar, allergies and ennui collided to render me uselessly cranky. I went to Half Price Books as a pick-me-up treasure hunt. After wandering the store and striking out in the Nancy Drew search, angels sang and a light shone upon me when I spotted Party Girl on the DVD rack. This movie stars the lovely and talented Parker Posey as world-weary party girl looking for her purpose and finding it in the library! This DVD is no longer manufactured and hard to find. I nearly wore out the videotape of this movie. When Chad & I (finally) made the switch to DVD only player (no more VHS) last year, my tape of Party Girl was no longer relevant. But I kept it, because I love the movie so much. Party Girl is my movie-woobie, like Linus' blanket or Lucy's duck, I need this movie near me. And now I have it in DVD form.

Who Wants a Cuddly Kitten?!


My fellow animal-lover and acting pal, Tracy, rescued four sweet cuddly kittens and their mama-cat from a raccoon attack. (Bad raccoon!) Tracy is keeping the mama-cat, but would like to find great homes for the babies. She says,

"They are very sweet, friendly, playful and loving . They get along great with other cats. Not sure how they react to dogs. They are 10 weeks old. They are fully weaned and eat Kitten Chow and Canned Food. Litter box trained. They are wormed and de-flea’d and ready to find loving, happy homes."

Let me know if you'd like Tracy's phone number to set up a kitten meeting. She has three boys (two gray-black puffballs and one orange striper) and one girl (a tortoise shell beauty).

If Chad and I weren't already housing three cats and a dog, I'd take one or two of these cuties, but we have a delicate balance in the fuzzy department right now. One more cuddle-monster might tip the scales in favor of the wild kingdom and send the fur flying.

Top 5 Reasons I Yearn for October 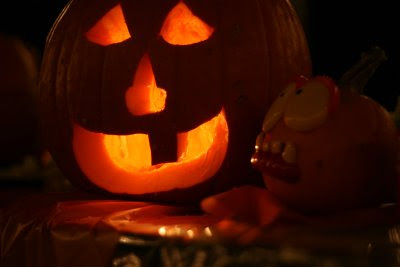 1. The cooler weather. Recent sub-100-degree days have offered an enticing preview of fall.

2. More willingness on my part to go outside, so I can repaint the trim that the previous owners of this house chose not to finish painting. It's on the roof peak. I spotted the incomplete paint job when I was watering our neighbors' plants back a few months ago. It's been bugging me ever since. I also want to repaint the shutters and doors from black to purple. Yep, purple. The paint color's proper name is "blackberry jam".

3. Gardening season! That dustbowl of a front yard is going to get a major overhaul and another baby tree. The baby tree we have out there now is lonely.

4. My birthday. The one day out of my year when tater tots and cupcakes are an acceptable meal.

5. The BYOP party! It's gonna be fun! I love carving jack-o-lanterns! Save the date of Saturday, October 25.

Extra, Extra, Read All About It


Yesterday I joined the ranks of many other central Texans who have served as extras on the television series Friday Night Lights. Set in the small fictional town of Dillon, Texas, the show revolves around high school football. I have never watched it. But yesterday I dined at the Dillon country club (actually Green Pastures Restaurant here in Austin) at the table next to the Garrity (football booster dad and head cheerleader daughter) clan and their guests. Janine Turner (of Northern Exposure fame) played a trophy-wife to some dude I didn't recognize.

I've often reported that I prefer the thrill of performing live to the hurry-up-and-wait repetition of film. The physical rush of acting on stage sometimes feels like my heart might jump out of my chest and I might pass out, which can be unpleasant at first, but feels invigorating once I find my rhythm and remember my lines.

Last weekend when I was serving as background scenery for my friends' sitcom pilot, I had fun. Between scenes I chatted with my pals and met some new people that were friends of friends. The sitcom guys were very gracious and said "thanks for being here" many times. In contrast, I didn't know anyone on the set of Friday Night Lights. The FNL crew mostly seemed annoyed at having to talk to us, rather than thanking us.

Yesterday started on a pleasant-enough note with the wardrobe lady liking my dress and the makeup lady complimenting my expert ability to apply liquid eye-liner. My car was chosen to be parked in the lot at the "Dillon country club" for which I was paid an extra $10/the equivalent of two-and-a-half gallons of gas.

Once we got to the restaurant, the boredom began. All of the extras had to wait in a small, stuffy room while the crew finished setting up the main dining room. Yawn. After 20 minutes we were herded in cattle-style and shown to our seats. I confess that I took a certain seat at my table on purpose by telling a man that "we should sit boy-girl-boy-girl" when I really wanted to sit facing out into the main dining room. My calculated move paid off as I watched the principal actors file in later and sit directly in my line of sight at the next table. For three hours, the other extras and I pantomimed conversations and pretended to eat. There are NO sounds allowed when the camera is rolling except for the main actors delivering lines. We had to be very careful to avoid clinking noises from glasses or silverware. The food had to be re-plated and picked up after every scene to be delivered again later, so we could NOT eat anything but little nibbles of our dinner rolls. My table mates were all talkative attention-mongers (actors, sheesh!) while I preferred to sit quietly between takes as directors and crew members walked around telling us to stay quiet and making the shhhh! sound/gesture. All the shhhhh-ing sounded like air rushing out of giant tires.

After the film crew shot each scene they needed from five different viewpoints, the crew and principal actors were whisked away in waiting vans. The other extras and I had to sit semi-quietly for thirty minutes and wait for the dust to settle before we were allowed to return to the casting office to sign-out and hand over our pay vouchers. Watching a show get made takes the glamor out of show business.

Maybe this season I'll actually watch Friday Night Lights so I can point to the teal out-of-focus blob at the Dillon country club and exclaim, "That's me!", but I hope I'll have better things to do.

One Step Closer to Dream Job

Regular readers (hi Grandma) and friends know that it is my dream-job to act as a sitcom-mom in a popular series for about five years, then maybe go off and do some Lifetime movies. Guess who was just cast as the mom for a sitcom pilot? ME! And it's a paid role. (Not that I act for the money, but money for work is a nice bonus/validation.)

I spent the past weekend working as a featured player (nice name for extra) on this same sitcom pilot. We filmed from midnight until sunrise at a restaurant after it closed each night. (Sound stages are awfully expensive. The owner of this restaurant is a mutual friend who let us use the place for free.) I know the writers of this sitcom, and think they are a great group of talented, smart, well-connected young guys who will go far. I am happy just to be a part of their dream. In turn, they are thankful for my willingness to give up a few nights of sleep to be background scenery (an extra) in the restaurant scenes for their pilot episode. One of these writers called me tonight to offer me the (paid!) role of the mom. Which means I'll be losing some sleep next weekend too for the nighttime filming.


Last week as I was out running errands, I looked ahead from my stopped position at a red light and saw a young woman standing on the concrete median between six lanes of traffic. She was NOT holding one of those sad signs begging for money. She had on earphones and was singing, or maybe lip-synching, and gesturing passionately. I assume that there was music coming through the earphones, but maybe not. Maybe there was just music in her head. Hopefully the music wasn't telling her to do bad things. I was at the red light long enough to see her finish a song, take a little bow with a flourish, and start another song. I totally stared at this really confident/kinda crazy girl as she performed. I didn't dare roll the window down to see if I could hear her actually emitting any sound, because I was a tiny bit scared. As my friend Jenny says, "don't mess with crazy, because crazy always wins."

Of course, maybe the girl at the intersection wasn't crazy. Maybe she lost a bet and had to perform to settle the score. Maybe she was getting paid to be out there, like the time I dressed up as Batgirl and walked around Sixth Street for that scavenger hunt. Maybe her performance was a homework assignment from her summer session of Psychology 301, like the time my Psychology professor instructed the class members to do something socially unacceptable, but not dangerous, and then write a one page paper about people's reactions. Hey... maybe it was for a Klondike Bar!

What Would You Do for a Klondike Bar? This following is excerpted from an email from a pal I met at an acting workshop. Go to the Klondike website and vote for her video! Details:

"Recently I had the pleasure of working with my friend and colleague Q Manning to create the following spec commercial for a contest currently being hosted by the Klondike bar company. The piece in question stars myself and a 4'x4' Klondike bar monster (voiced by the lovely & talented John Gholson), and can be viewed here:

It is imperative (IMPERATIVE!!!) that you VOTE VOTE VOTE for us once you view the commercial, as a substantial cash reward hangs in the balance! The site requires one to "register" in order to vote, which is a bit of a pain in the @$$ (apologies for this)...nevertheless, your love, support, and good juju (in the form of a vote for "5 Klondike Bars") would be greatly appreciated :-)"