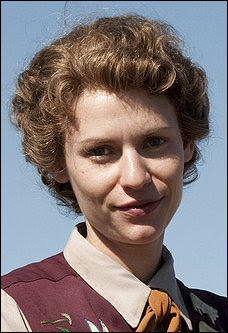 If you have HBO, set your video recorder for the premiere of the biopic Temple Grandin tonight at 7:00 Central / 8:00 Eastern. Filmed in the Austin area, starring Claire Danes, this movie recreates the fascinating history of Temple Grandin - a talented and intelligent, autistic woman who researched and designed advances in the humane treatment of cattle and who also serves as an advocate for autistic people. I watched the film Thursday night at HBO's Texas premiere party, and loved it. The story was touching, visually artful and humorous. While watching I completely forgot about Claire Danes as an actress, and was immersed in Temple Grandin's personae. Claire Danes did an amazing job. I don't want to give anything about the story away, so no spoilers here.

HBO kindly and thoughtfully hosted a lovely premiere event at the Austin Convention Center with Temple Grandin herself speaking after the movie. Ms. Grandin spoke with charm, wit and passion about her research and about living with autism. I'm so glad I was invited to attend. HBO also gave copies of Ms. Grandin's book Thinking in Pictures to guests. I'm looking forward to reading it!

Friends, you may remember me gushing over getting to work on this film as a 1965 airline stewardess. You can see my back in the first scene. I'm in a beige stewardess outfit with my hair in a bun and a pillbox hat. Honestly, I'm a tad disappointed that my face isn't visible in the film, but that's such a shallow complaint in light of this great story. I'm blessed that I was able to be a teeny-tiny part of such a wonderful project.