Biopsy is a Scary Word 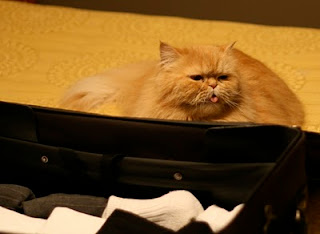 Our sweet old lady cat, Marigold (a.k.a. Miss Mare, Mare-bear, Mei-mei, Old-Lady-Baby and Baby-Granny), had a growth removed from her cheek last week. Due to her senior-citizen status and the suspiciously fast appearance of the growth, the vet (a.k.a. my hero) advised that we should have the growth biopsied to rule out cancer.

A little history: Chad and I dated for nearly five years before we got married. As Chad and I got more serious and started planning for the long-term, he told me he was allergic to cats. Fine, I figured we'd have dogs, because I knew I wanted pets. Eight months before we got married I tried to break-up with Chad for reasons which make absolutely no sense to me now, but which seemed earth-shattering at the time. Chad refused to be part of the break-up, and showed up at my apartment daily much to my annoyance and confusion. I, being absolutely certain of the break-up and its permanence, got a cat. Not just any cat, a gorgeous blond and auburn Persian kitten. I figured that getting a cat would be like Chad-repellent, since he was deathly allergic to cats, or so we believed... Upon telephoning me (I didn't have caller-ID) and learning of my new cat, Chad came over almost immediately to meet her. She didn't even have a name yet. He was so enamored with the tiny puff-ball kitten, that he snuggled and cuddled her, and started thinking up names for her. I nearly named her Pumpkin, but Chad came up with the brilliant name Marigold. Long story short, Chad wasn't actually allergic to cats. He took so many photos of Marigold when she was little, and asked in seriousness if we should make a baby-book for her. As you know, Chad and I did get back together, and he even tricked me into marrying him. What I thought would drive Chad away, namely Marigold, ended up bringing us closer together.

This cat is such a part of our family, that I was devastated to think there was even a possibility that she might have cancer. I got weak in the knees and felt faint when I saw the seven (!) sutures on Marigold's pitiful shaved cheek where the growth had been removed. I kept it together in the vet's office and on the drive home, but started sobbing as soon as Marigold exited her kitty carrier at home. I worried and waited for five days to get the biopsy results. The vet called me himself with results, which I initially thought might mean the news was bad, but he quickly stated that the test results yielded good news. Marigold had a benign cyst, not cancer! I'm so thankful and happy that we'll have our sweet, funny Marigold with us longer, and that her quality of life is still great. 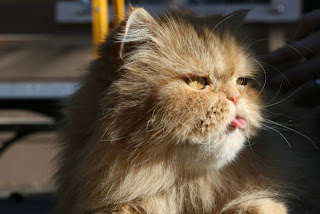