Donate to a Great Non-profit 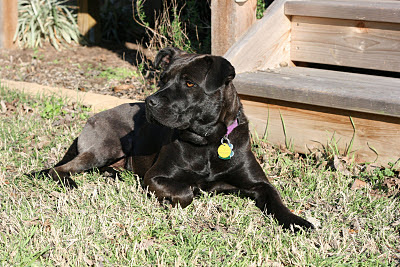 Our sweet, silly dog, Janie Lulabelle-May, or Janie-belle for short, or Janie for even shorter, suffered some kind of injury while living on the streets. Janie limped on one of her back legs and her left eye rolled in its socket with icky discharge. She may have jumped from something high and landed badly, been glanced by a car or been abused. We don't know what caused the injuries, but we do know that the wonderful people at Animal Trustees of Austin gave Janie a Femoral Head Ostectomy surgery to help her hip heal and eye surgery to help her see better before we adopted her from Blue Dog Rescue. Thanks to Animal Trustees of Austin, Janie now walks two miles a day with no discomfort and has better use of her left eye. Thanks to Animal Trustees of Austin, Janie became an adoptable dog rather than a sad statistic of another dog euthanized at the shelter because her care would have been too expensive.
Click on the link below to join my fundraising efforts for Animal Trustees of Austin to help them provide low cost and free veterinary care. I'll also put a widget in my blog's sidebar so you can track progress towards my goal of raising $250 for Animal Trustees of Austin before November 13.
Thanks from me, Chad & Janie Lulabelle-May
*Click to Donate*
Posted by Jenn C. at 11:38 PM