The crazy color quilt bedding saw better days at the 1952 House, and the ancient super-soft sheets fell victim to Kenji's claws. Kenji is the worst helper when trying to make the bed. She runs around under the covers, digging in her claws for takeoffs and landings. She is no longer allowed in the room when the bed is being made. No need to call the ASPCA. As evidenced in the photo, Kenji is allowed back in to lounge after the bed is made. 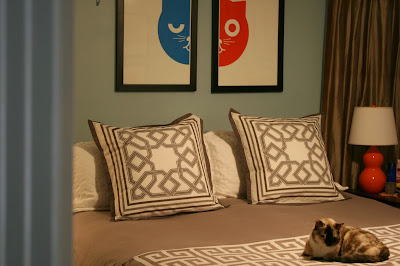 Time for new bedding, I resisted my employee discount this round. (Sadly, Chad and I are both too "Princess and the Pea"/Sissy-La-La for thread counts below 500.) I combined The Company Store sheets, duvet, white shams and generously king-sized comforter with Jonathan Adler euro shams and a Greek key design Matouk throw blanket. It's a little dreary and drab after the crazy quilt bedding, but it's all so incredibly soft, that it's like sleeping on Cloud Nine.

I ordered a Natori dragon euro sham to throw in the middle to add a little lucky liveliness. I'll post a photo if it's a keeper. Kenji will likely sit for that photo session also. Her agent promises to get back to me with her availability.