Sonic came to live with us in October of 2006 when he was approximately six months old. He was originally found in a feral cat colony in the Travis Heights neighborhood. Sonic was named for his loud, yodel-like meows by the lady who found him. Sonic was always very chatty, responding vocally to any prompts. Sonic adored and annoyed his two older feline roommates in equal measure. He loved people, especially people who fed him. Sonic loved a heating pad. Perhaps owing to his early days in the feral cat colony, Sonic also enjoyed the outdoors. Typically, when Sonic went outside he stayed in our backyard, in or on top of his heated, weather-proof cat shelter on the back deck. 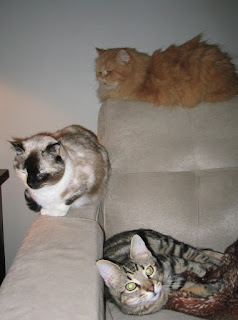 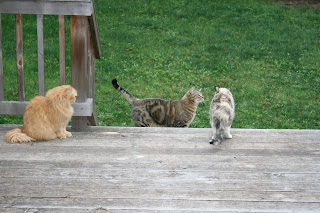 Sonic was mostly a sweet cat who loved a warm lap and getting brushed, but he had his dark side. Sonic struggled with anxiety which manifested in resource guarding and inappropriate urinating all over our home. The amount of Sonic's pee I cleaned up over the years is both heart-breaking and infuriating. Heart-breaking that he suffered with his anxiety. Infuriating, because cat pee is a booger to clean. The amount of Simple Solution and Nature's Miracle we went through with Sonic was astounding.

Sonic did not like our dog, who joined our home in February 2008. Sonic charged at our dog, and bopped her on the nose aggressively a few times a week. Our dog is a tolerant sweetheart, and never once defended herself. I tried to explain to Sonic that he weighed thirteen pounds and the the sweet, tolerant dog weighed fifty-plus pounds. I told Sonic that one day he would pick a fight above his weight class, and that it would not end in his favor. (This, here, is called foreshadowing.)

Sonic loved his new little brother, L.B., when he arrived on the scene in December of 2015. The two boys were sweet wrestling buddies, always up for a game of chase. They both indulged in catnip, laser pointer shows and ribbon chasing together. 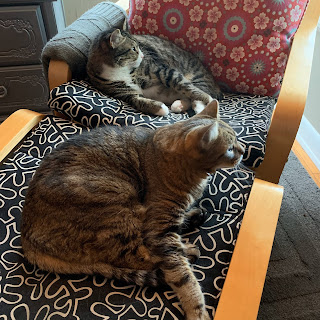 Late on the night of Friday, March 13, I heard (but thankfully did not see) a cat's war cry out in the front of our home. The yowl was loud, and ended abruptly. L.B. was sitting with me at the time, and heard the ruckus also. It ended so quickly that L.B. and I thought nothing of it, returning to our reading. The next morning Chad asked if I had let Sonic inside last night, because Sonic wasn't waiting at the backdoor to come inside that morning as he usually was. I said no. I did a thorough sweep of all of Sonic's favorite cozy hiding spots inside the house. No Sonic. I walked the front yard, the side yard and back yard, calling for Sonic. He typically came running when I called him. Still no Sonic.

At this point, I think my brain was protecting me from the memory of what I'd heard the night before. Especially on top of the whole quickly evolving COVID-19 situation, I was processing too much information.

Chad and I have seen coyotes roaming our neighborhood late at night on several occasions. They come up from the creek bed, looking for food when most people are sleeping. But Sonic had disappeared in the past for up to three days, and returned home unscathed. I was trying to decipher if Sonic was out on an adventure, or if Sonic had been a coyote's dinner. I checked the local lost and found pet pages online. Still no Sonic. I checked his microchip registration, which has current contact information. No reports of a microchip scan for Sonic.

On Sunday afternoon, March 15, I looked at Chad and said, "It feels different this time. I don't think he's coming home." Then I teared up just the tiniest bit as I relayed the scuffle that I heard out in front of the house the night Sonic disappeared.

Three weeks later, still no Sonic. We're 95% certain that Sonic charged at a coyote, thinking he would win that fight, and became the coyote's meal. The circle of life isn't always pretty.

Sonic lived a good life of almost fourteen years. He was predeceased by two of our beloved O.G. cats. He is survived by Janie, the dog he bullied, and by L.B., his beloved feline companion. Sonic's favorite vet tech, Jan, once said, "He's a cool cat, so chill, just hanging out with us while we do his bloodwork and urinalysis." While in some ways we miss Sonic, in other ways it is a relief that he is no longer peeing all over our home and bullying our sweet, elderly dog. 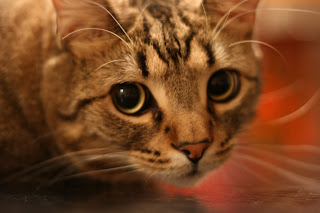