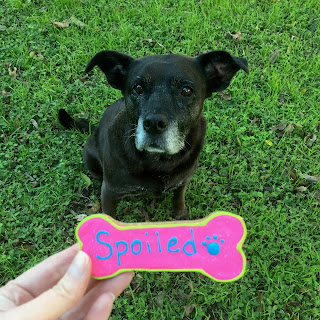 Janie Lulabelle May Snacks Currie was an excellent dog. Known by her friends as just Janie, she had a rough start in life as a young single mama. Janie and three of her puppies were picked up as strays by benevolent animal control employees and taken to the city animal shelter. Back then, Austin was not a no-kill city as it is now. Blue Dog Rescue group plucked Janie and her puppies out of the city shelter before their time ran out.

Chad and I went to a meet and greet adoption event for Blue Dog Rescue. We had picked out three other dogs based on their cute online profiles. Two of the three were already adopted by the time we arrived, and that third sweet dog was not the right dog for us. One of the coordinators for Blue Dog Rescue steered us toward Janie. The coordinator told us about Janie's excellent manners, her gentle nature as a mama dog, and her success rate with house training. Janie's puppies had all three been adopted, but Janie remained. People love puppies, and I get that. But Chad and I wanted a calmer, house trained dog, who knew the sit command, and could walk on leash. We did not want a puppy. We took Janie for a walk around the Petco parking lot. She took care of business, as if to say, "I feel immediately comfortable enough to poop in front of you." When we dropped her back off at her crate with her foster mom, Janie sat down and flopped over to reveal her tummy for pets. Chad and I both knew in that moment that this was our dog. I feel like she picked us, just as much as we picked her.

In her younger days, Janie enjoyed walking (up to three miles a day) at a good pace. She savored chewing on Nylabones and Benebones, earning her the nickname "Landshark." Janie liked to sunbathe on the back deck for hours at a time. We would make her come inside at regular intervals to cool off, teasing her that she shouldn't bake her brains too much. Janie loved attending the prestigious day school at Camp Four Paws, and was head of her canine class for many years there. She relished a good romp at the dog park. Janie never got the knack of swimming per se, but she delighted in a nice soak in the waters of Shoal Creek or Lady Bird Lake.

Janie spent thirteen and half years with us. (She was at least fifteen years old in total.) She was an excellent nanny dog for many foster kittens and for two foster puppies. Janie was very sweet and gentle with our resident cats, and especially patient with Sonic the bully. Janie met our most recently adopted cat, Queenie (more on her later), and shared her heating pad with the new kitten.

As Janie got older, she experienced steadily escalating troubles with her back hips. Under our veterinarian's care, Janie was taking a daily NSAID pain reliever which we supplemented with CBD treats. Near the end, Janie let us know that she was increasingly in pain and discomfort.  She paced around at night, and could not be consoled. She whined softly as a way to sooth herself often. Janie no longer enjoyed sunning on the deck or chewing on Benebones. Chad and I had many tearful talks about what we needed to do for her. We decided that for the final two weeks before her scheduled farewell appointment, we would double-dose her NSAID tablets and give her the maximum recommended CBD treats each day. (Double-dosing the NSAID meds is not sustainable as it can cause stomach ulcers among other problems, but we knew it would be for a very limited time.) We spent her final two weeks spoiling her rotten and doing everything we could to make her comfortable and happy. Despite our best efforts, she was still clearly uncomfortable and tired of everything. On Janie's final day, the doctor at our veterinarian's office told us all the perfect things: "You gave her such a good, long life. We should all be so fortunate. It is very selfless of you to let her go. She knows you are here with her. She's drifting off to sleep." And after a moment, the doctor listened for a heartbeat, and hearing none, she said, "Janie is at peace now." Chad and I each kissed Janie's giant, heart-shaped forehead a final time as we cried with jagged breaths and snotty noses.

For weeks after Janie's departure, we wondered if we did the right thing. (We know rationally that we did, but this is part of the process of grieving an old dog, a beloved family member we carefully chose.) Chad and I start each other crying again with a shared memory, a knowing look, or a mention of Janie's schedule. We were absolutely spoiled to have a dog as sweet and gentle and full of personality as Janie was. 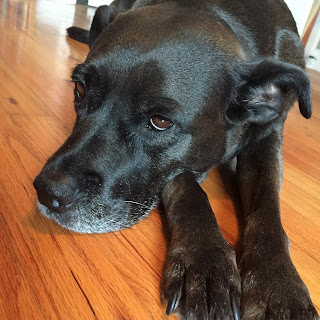 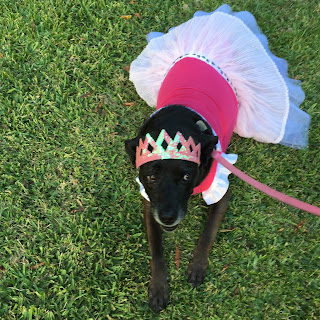 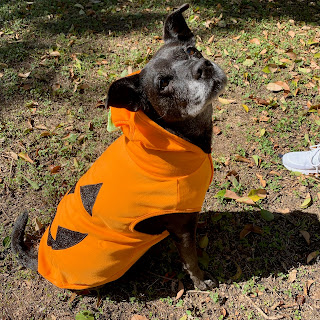 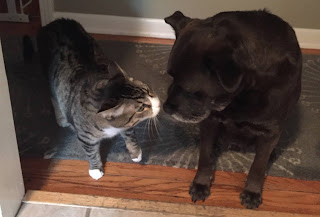 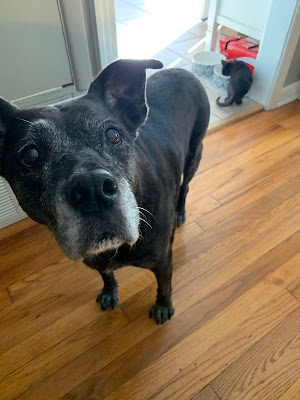