Chad walked inside the front door of the 1952 House with Janie's faux-fur couch blanket, fresh from the dryer, draped over one shoulder. While still holding the security door ajar, he started doing a crazy dance and announcing in a panicked voice, "Oww! Moth!" Janie-dog and I gazed on in confused concern and no small amount of fear. Chad commanded, "Get the tweezers!" as he ran towards the bathroom, dropping Janie's blanket on a chair.
"What?!" I'm sure at this point it seemed to Chad as if I moved at a glacial pace, unwilling to render aid. I had yet to register what happened, or why I needed tweezers. "A moth flew into my ear," Chad fussed.
"Oh!...Oh, no!" I fussed.
Then I heard the awful noise of tiny wings beating rapidly inside Chad's ear canal. I couldn't see anything in Chad's ear, but I could hear it. "Oww! Get it out!" I tentatively put the tweezers near Chad's ear canal, but still unable to see the moth, decided not to poke the tweezers beyond where I could see. Chad told me to get a flashlight, which didn't help. Chad and I can't remember who decided we should put the moth out of its frantic misery with Swim-Ear drops, but we did. The poor moth died, but quit flapping its wings against Chad's eardrum, and quit traveling deeper into Chad's ear.
Let's pause for a brief public service announcement. As Chad and I learned from an Internet search conducted after the moth died, but while it was still lodged against his eardrum, if a bug flies or crawls into your ear, do not panic. (Much more easily advised than done.) Do not put tweezers or a cotton swab into the ear canal, as it may cause injury, and will likely push the bug deeper into the ear. One should seek medical treatment to remove the foreign object from one's ear.
However, if you feel ridiculous seeking treatment for a moth in your ear, you can try putting olive oil or baby oil into your ear to flush out the interloper. We tried olive oil with no luck. We also tried a warm water wash delivered via a nasal flush bottle from all sorts of different angles with no luck. Again, at Chad's urging, I tried (very gingerly) to tweeze the now-dead moth out of Chad's ear with no luck. Chad brought a different, brighter flashlight to try and help me see the moth with no luck.
I finally offered to take Chad to either the Emergency Room or the minor emergency clinic if we could find one that was open on a Sunday night. After a bit of hemming and hawing, more Internet searching, Chad finally said he would drive himself to the urgent care clinic. "You are not driving yourself! What if that moth wakes up?" I nagged.
Luckily, we were the only customers in the urgent care clinic. The receptionist didn't bat an eye when Chad announced his reason for visiting. The nurse and doctor delivered two warm water flushes before they could see the moth with their medical-grade ear-looking-tool. "I can see it!" announced the nurse with equal parts victory and revulsion. One more warm water flush brought the moth close enough to the ear opening for the doctor to grab the carcass with an intimidatingly long pair of snub-nose, tweezers.
Chad, the nurse, the doctor and I all gazed at the enormous, wet moth body on the medical tray. Gross and fascinating! The doctor smiled and told us that the cover of the urgent care textbook featured an illustration of a person with a bug in their ear, but that this was her first case of bug in the ear. After the nurse flushed Chad's ear once more to get out the moth dust, the doctor brought the textbook into the exam room for a humorous viewing of the cover. Chad's case, while highly unusual, was literally textbook cover material.
It didn't end well for the moth, but Chad feels much better now. He learned a valuable lesson not to dilly-dally near porch lights lest an unwelcome bug fly into one's ear. 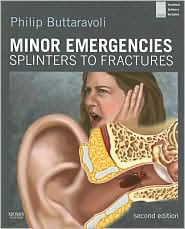