Monday morning I was awakened at 4:45 by a rooster crowing. As I fumbled in the dark to find the earplugs I packed, I offered a telepathic message to the noise-maker. "Rooster, dear, I need you to get it together. It is still dark. Calm down. Shut your yap." After a few more hours of fitful dozing, I got up and made myself somewhat presentable for breakfast. Post-breakfast, I scolded the rooster aloud when we met up in the parking lot, suggesting he might want to visit a therapist about his anxiety-fueled vocalizations. 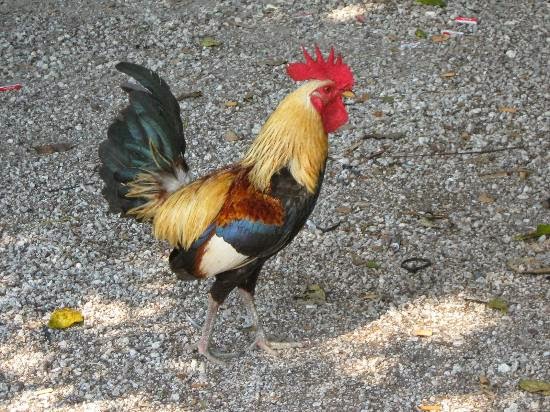 Chad and I walked down Simonton Street toward the Key West Art & History Museum. We passed the usual T-shirt shops, cafes, day spas and bars along the way. One establishment that caught my attention in particular was the shopfront for Pirate Costumes of Key West & Key West Weddings. If you have your wedding on Key West it should be pirate themed? Clearly.

The Key West Art & History Museum is air-conditioned, not crowded and hosts interesting stuff to look at and read. We lingered and looked at EVERYTHING in that lovely air-conditioning. The exhibit on Hemingway's time in Key West mostly revolved around his fishing adventures. The exhibit on Key West's role in the Civil War was pretty interesting. Key West was actually a Union stronghold! As we walked up the grand stairway, we looked at illustrated excerpts from The Old Man and the Sea. The second floor housed an exhibit and information about Henry Flagler & his role in bringing the Overseas Railroad to Key West, along with the unfortunate destruction of the railroad line during the 1935 Labor Day Hurricane. We also viewed works by folk artist, Mario Sanchez, many of which were wood carved in relief painted in bright colors with scenes of everyday life.

After the museum, we walked back down Duval Street: the more raucous end of which should not be viewed, or smelled, in the good light of daytime. We bought a coconut from a stand to drink. The proprietor of the stand drilled a small hole in the top for a straw. The coconut juice was yummy, but warm. File my suggestion to refrigerate the coconuts under "first world problems".

After a brief stop at our hotel room to cool off, we walked farther down the quiet end of Duval Street to the Banana Cafe for lunch. The Banana Cafe has a French theme to the menu. I had a veggie baguette. Chad had a crepe with a green salad on top. The food was simple with fresh ingredients.

Walking back to the hotel after lunch, I heard a noise coming from the bushes as I walked by them. I said to Chad, "There is something angry in those bushes." Upon closer inspection, I realized that the angry cluck came from a mama hen with her brood of ten baby chicks! They were so stinking cute!

Later in the afternoon, we set out for a sunset snorkeling cruise with Fury Water Adventures. The crew members of the boat presented a perfect balance of fun and safety mindedness. Before setting out, the captain told us we would not be going to the barrier reef as planned due to three foot waves and low visibility. Instead we went to a shallow water shipwreck that only had six inch waves and much better visibility. The water was crystal clear, and the sunken ship served as a sort of reef. We saw clownfish, angelfish, grouper, a pufferfish and several kinds of coral. Chad spotted a big crab scuttling across the gulf floor. As we cruised back toward the dock after snorkeling, the boat captain turned the motor off for a few moments so we could watch the sunset. It was lovely, and our view was not blocked by a giant germ boat, I mean cruise ship. Snorkeling was my favorite activity during our trip to Key West. 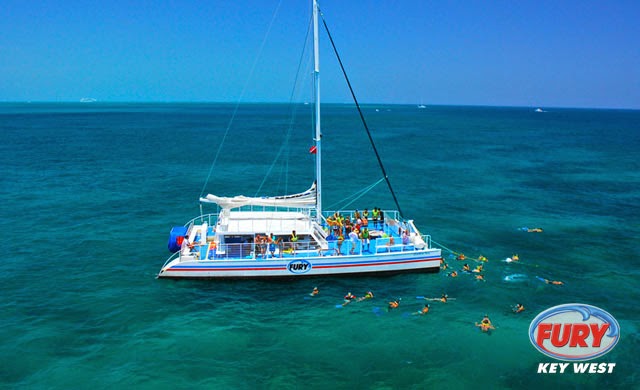 Tune in tomorrow (or maybe the next day, I get distracted) for more Key West travelogue featuring the Eco Discovery Center and Blue Heaven.