After breakfast at the hotel, we headed a few blocks south to Southernmost House for the 13th Annual Michelle's Willie Wonka Chocolate Festival to benefit the Cancer Foundation of the Florida Keys. For me, this was not about contributing to a noble cause, the festival flyer had me at "chocolate". A teenage guy wearing a polyester (that mess does not breathe, bless his heart) Willie Wonka costume greeted each guest, bravely smiling and directing guests to the chocolate fountains tent and baked goods as he handed out Golden Ticket stickers to wear for event entry. The chocolate festival boasted mostly baked goods and two different triple-tiered chocolate fountains. I sent a pretzel rod through the fountain. Chad opted for a banana. We shared. All was yum. From the crazy buffet of baked goods, we shared a slice of chocolate layer cake and an oreo-flecked brownie. The treats were rich for such a hot day. Chad and I quipped that we would pay "tourist money" for pints of milk to wash down the sweets. We had to settle for bottled water at $1.00 each. Note to planners of future Wonka festivals, charge $5 for a pint of milk to raise even more money for your cause. Southernmost House is a beautiful old Victorian-style mansion complete with Candyland color scheme and a fairytale turret, which provided a nice backdrop for the Willie Wonka theme. 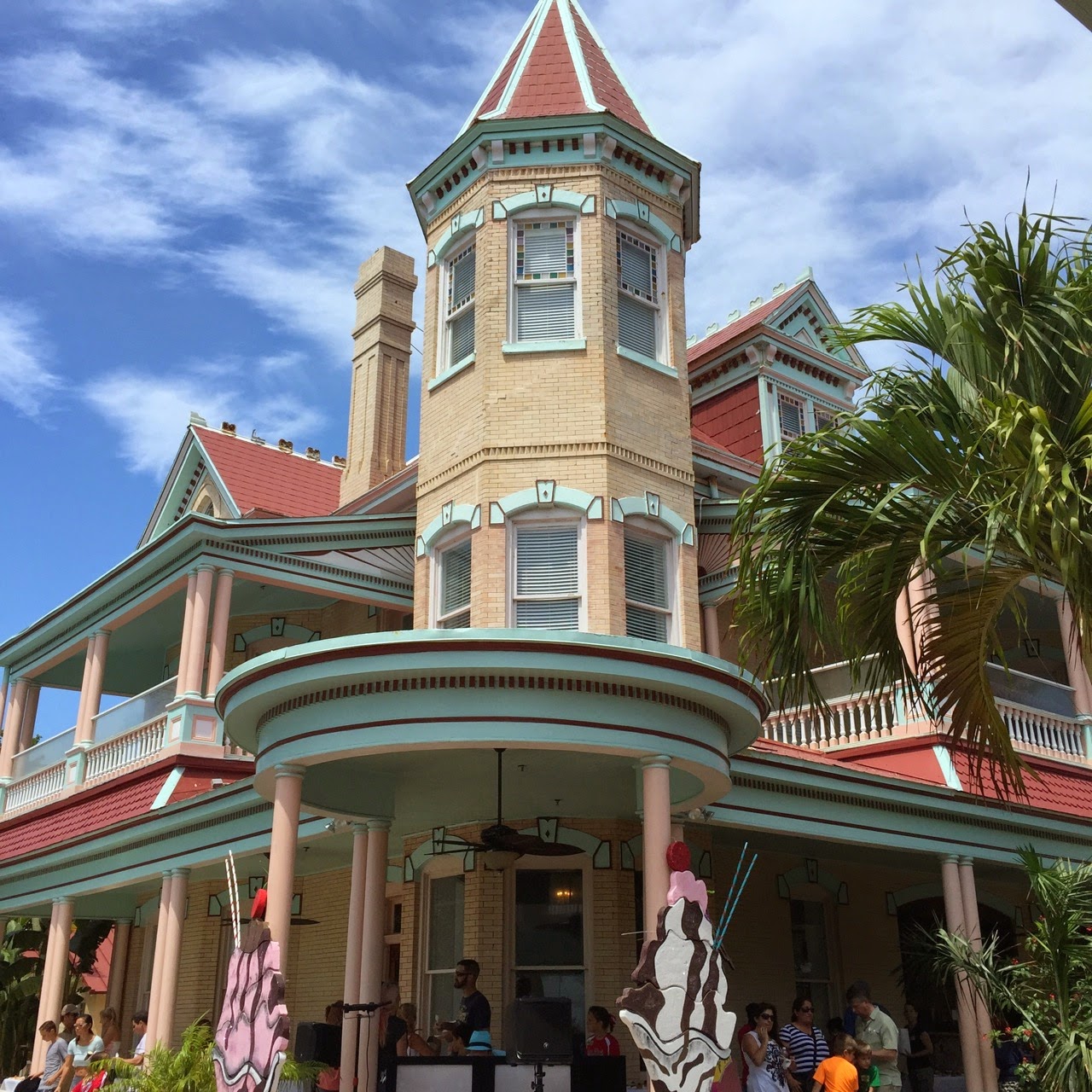 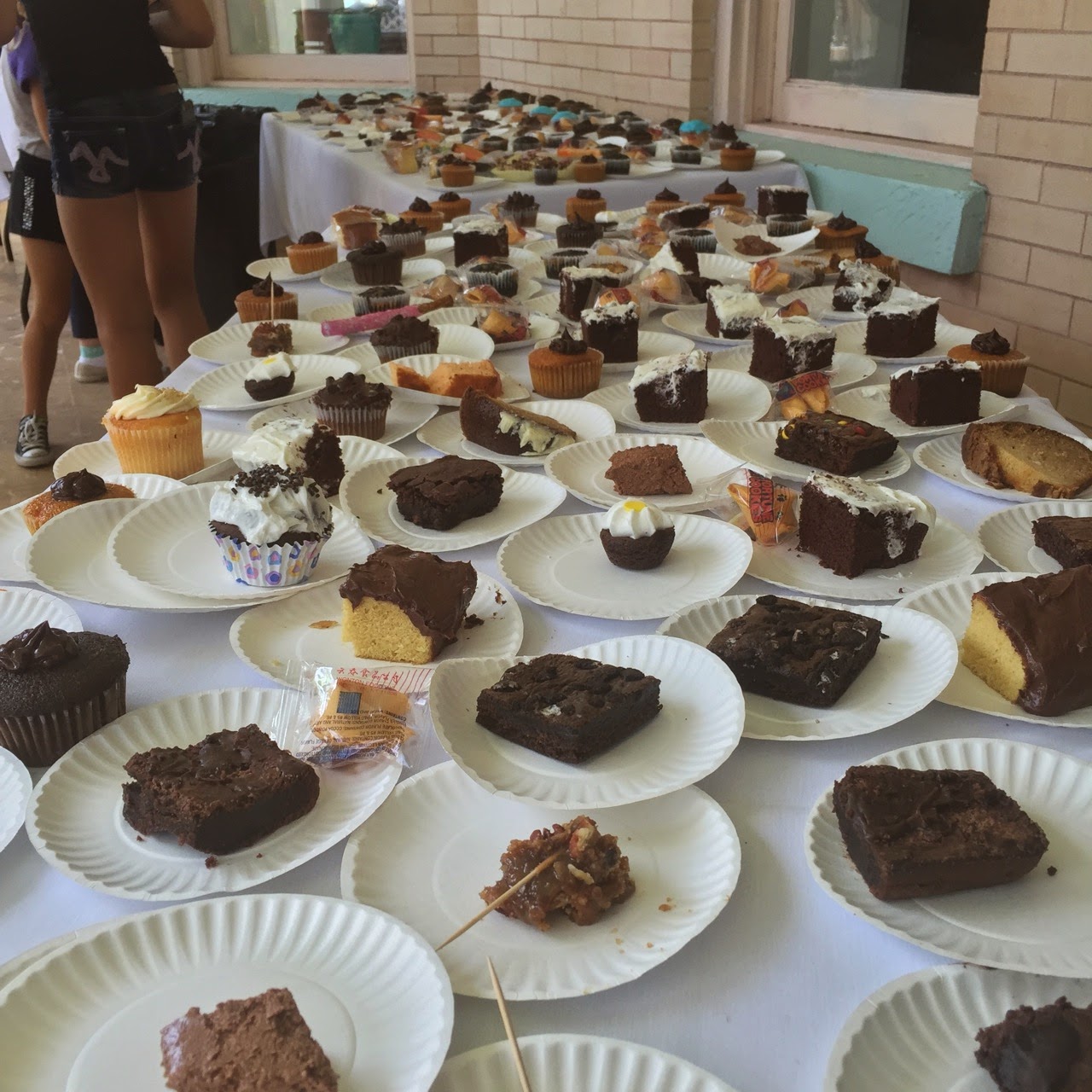 After so much sweet stuff, we decided to move along. We rounded the street corner to an old sewer junction painted to look like a buoy that is known as Southernmost Point, meaning the southernmost point in the continental United States of America with only 90 miles over the Gulf of Mexico to Cuba. Chad and I did not stand in the long line stretching down the sidewalk to take a photo there. We're not big on selfies or on repeating postcard shots that everyone and their grandma take. It's enough that we were there and saw it. 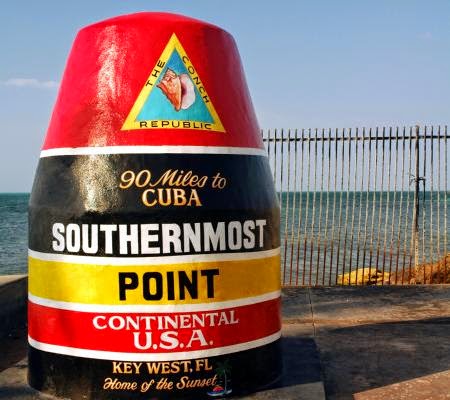 On our walk to the next stop for the day, Hemingway House, we saw a family of chickens scratching the ground for foodstuffs. The mama hen had three, gawky teenage chicks with her.  They were a cute little family. This scene of free-roaming chicken families was to be repeated many times during our trip. *Click here* to read more about the chickens of Key West.

Hemingway is not my favorite author by a long shot. I enjoyed The Old Man and the Sea reasonably well when I had to read it for school, but didn't like For Whom the Bell Tolls. I mostly just wanted to see the polydactyl descendants of Hemingway's cats. On the information-packed tour of the Hemingway House, we were regaled with the history of the house itself, some history of Key West, juicy scandals surrounding Hemingway and his many wives, and yes, lots of extra-toed cats. Ship's crew liked to have cats with big paws aboard to combat the rodent situation. Cats with extra toes were prized, and thought to be better mousers. A boat captain gifted a polydactyl cat to Hemingway, and he loved it. Approximately forty cats live at the Hemingway House today. The tour guides know each cat's name. They are well fed and have free reign of the place. A veterinarian visits twice a week to check on the cats. Most of the cats are spayed/neutered, but a few of the polydactyl ones are allowed to keep the bloodline going. One feline fellow even allowed me to pet him. This napping cat was perfectly posed with his extra toes on display. 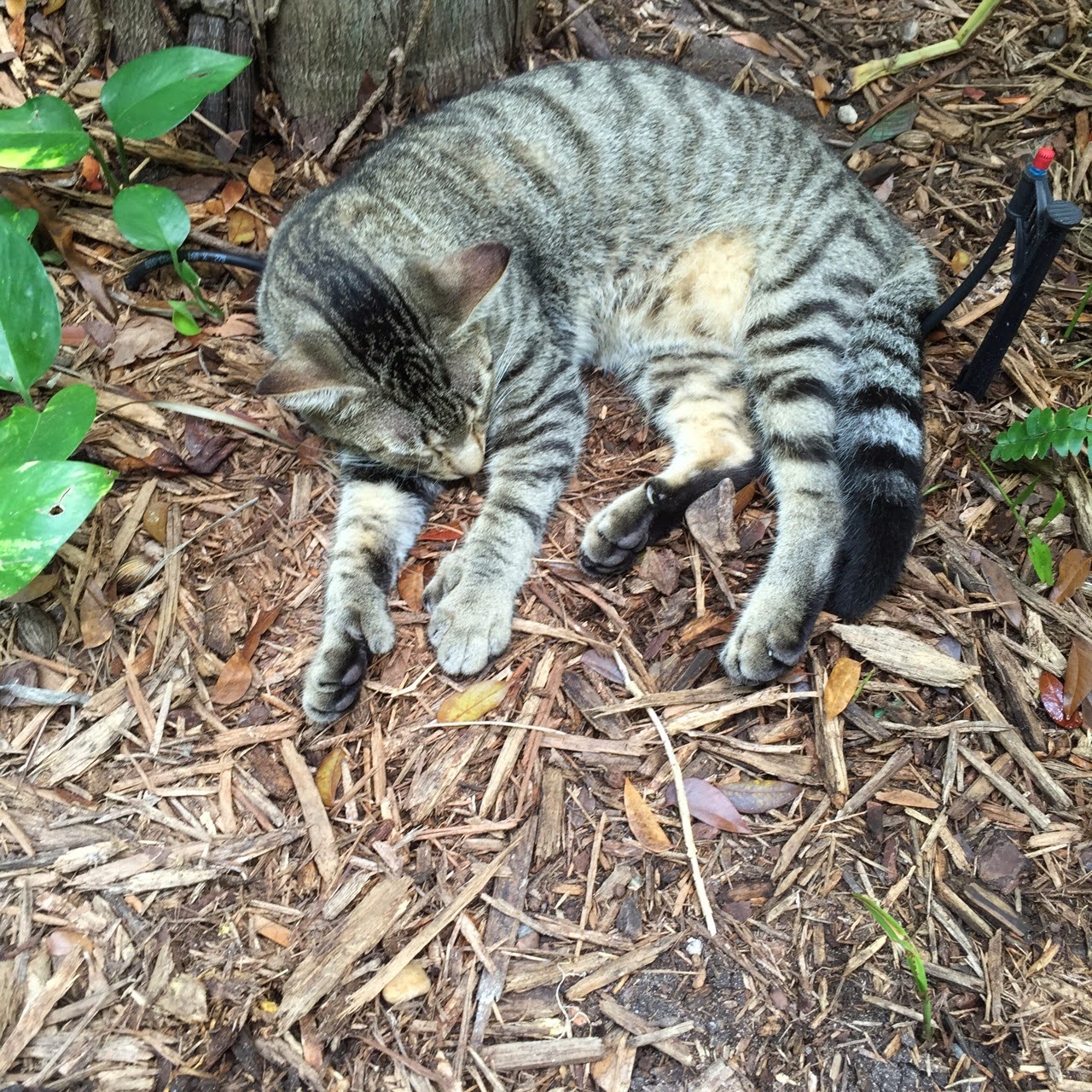 After our tour of the Hemingway House, we returned to the hotel to rest and try to stop sweating for a bit in the air conditioned room.

Chad and I wandered over to Blackfin Bistro just around the corner from our hotel for a late lunch. Blackfin Bistro was pleasantly dark and cool, a respite from the scorching afternoon sun. The decor drew me inside with seed glass pendant lighting, weathered-looking shiplap boards on the bar front and clean lines. Blackfin Bistro was crowded when we passed by it earlier in the day, but we were the only customers there at 3:00. I love having a place to ourselves. I had a brie, apple, avocado sandwich. Chad had a fish sandwich. We both had mimosas with fresh squeezed orange juice. (Seriously saw the bartender squeezing oranges.) So good!

After lunch, we again returned to the hotel to rest and try to stop sweating for a bit in the air conditioned room. (Along with spotting free-roaming chickens, returning to the room to cool down from the heat and humidity was another recurring motif during our trip to Key West.)

Later in the evening Chad and I walked down to Mallory Square to watch the sunset. Chad and I share an uncomfortable avoidance of street performers, so we didn't stop to watch anyone juggle flaming things, breakdance or swallow swords. I know, we're both total buzzkills. Unfortunately, there was a huge cruise ship blocking the view of the sunset from Mallory Square. We got out of the ship's shadow by walking down the boardwalk to the Westin Resort Pier, where we stood on a low retaining wall to watch the sunset. It was pretty over the water, and seemed to sink quickly into the gulf. There was no fanfare, clapping or even "ooh"s or "ahh"s from the audience. I mention this to serve as a contrast to the sunset show at The Oasis restaurant in Austin. As the sun starts to set, a bell is rung, the sunset is announced, after a moment of watching the sun sink to Lake Travis on the horizon, clapping and hooting erupt seemingly spontaneously. Toasts are made. That's how you gratefully and festively observe a sunset, people! A sunset is not properly celebrated from behind a huge cruise ship that blocks the view of the horizon.

Walking back towards our hotel from Mallory Square, we stopped for dinner at Mangoes on Duval Street, yet another outdoor seating establishment. I sometimes tire of being a vegetarian, and struggling to find meatless dishes at restaurants. It's like I'm stuck in a revolving door of: salad, veggie burger, bruschetta, caprese sandwich, when perusing menus. I had bruschetta and a salad for dinner. It was fine. Chad, however, was spoiled for choice as an omnivore who loves seafood. He had ceviche and liked it. Dessert was key lime pie (naturally) topped with a tiny shot of whipped cream to cut the tartness. This key lime pie was not too sweet and not too tart -- just right.

Gentle Readers, I am a jaded old soul. Very little is ever quiet as great as I think it will be despite constant attempts to manage my artfully high, crazy-creative expectations. I am an ambitious aesthete, always wanting more beauty, delight and surprise. It's my bedazzled albatross to bear. If sometimes my take on places and events seems overly critical and underwhelmed, I own it. This serves as my disclaimer that while not every aspect of our Key West vacation was dazzling, I really liked it overall.

Tune in tomorrow for more Key West travelogue and tales of sunset snorkeling.