Five Reasons I Stay in Austin

I cannot tell a lie. Between the traffic, the human hordes, the loss of too many things that gave Austin its unique (some might say weird) character, the near-constant state of construction all over Austin and the "warmer than normal" weather in a place that I've always considered to be too hot, I am antsy to leave Austin. I want to move somewhere that has real seasons, not just allergy seasons. I want a slower pace of life in a less populated city with a lower cost of living.

As I walked around my neighborhood yesterday, dodging the bulldozers and breathing in the dust of road construction, I pondered why I was sweating so profusely. Probably the 85 degree Fahrenheit temperature and bright sun bearing down upon me... on October 27.

Despite all of the above-mentioned mess, here are five things that keep me in Austin.

1. A few good, dependable friends. You know who you are! I would miss you too much if I moved away from Austin.

2. Austin is one of the most vegetarian and vegan friendly cities in the United States according to several polls/lists including the Huffington Post. *Click here for the link.* I don't always feel like cooking. I love that Austin has so many vegetarian and vegan restaurants! I also love that Wheatsville Co-op and local HEB grocery stores offer many clearly-labeled vegan options in their prepared foods and frozen foods cases. I don't often brave the traffic or crowds to go to Whole Foods Market lately, but it's there when I need it!

3. Austin is a pet friendly city full of no-kill shelters and pet rescue groups. Of course, this presents challenges to maintain the 90% live outcome rate for pets entering the Austin Animal Center, but I love that this city of mine tries so diligently to get pets spayed/neutered, to offer low-cost veterinary care to those who need it, to get pets into good homes and to allow neighborhood cats to be vaccinated, spayed/neutered and returned to their neighborhoods.

4. The Lower Colorado River, also known as Lake Austin and Ladybird Lake or Town Lake, this river runs through downtown with jogging paths all along the banks. Not that I jog. Eww. Okay, once I jogged on the trails by the lake for an educational video to be shown in Science Museums, but that was acting. I got paid to do that. I like to walk. I also like to kayak when the lake is not too crowded. 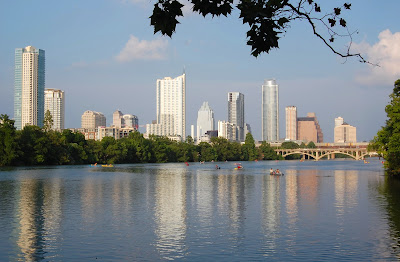 5. Our wonderfully kind veterinarians and vet techs at Highlands Pet Medical Clinic. When you have as many pets as we do, finding a veterinarian who likes cats and doesn't outwardly judge your menagerie of furry housemates is important.