Chad and I typically take one trip each year that does not involve visiting family members or work. (Some years our finances or work schedules don't allow for non-family-visit travel. Staycations are the worst. We've tried staycations a few times with stupid results. We did too many chores and house projects, rather than resting or having fun.) This year we visited Seattle and San Juan Island, Washington.

Chad made many work trips to Seattle over the years, but work trips are spent working, not doing fun stuff. (Overpriced, overlong client dinners are decidedly not fun. Don't believe anyone who tries to humble-brag to the contrary.) Chad and I visited Seattle together about 19 years ago when we were mere babes. Seattle changed and grew since our last visit, and so have we.

Other than the long check-in lines, our Southwest flights for this trip were on time, friendly and safe. Oh, and cheap.

After research on tripadvisor.com I chose the Maxwell Hotel in Seattle for our three night stay in the city. Chad and I both loved the Maxwell Hotel in Seattle! Conveniently located in the Queen Anne neighborhood near many restaurants and near Seattle Center which includes Chihuly Garden and Glass and the Space Needle, our hotel room featured a perfect view of the Space Needle!

The Maxwell Hotel has modern, whimsical decor. There were interactive art pieces in the elevators like this rotating words piece that made sentences about regional sports teams, tourist attractions and fun activities.

The bedding was super-soft and European style, meaning we each got our own duvet. Chad and I agreed that we slept very well at the Maxwell Hotel, especially considering it was a hotel. (We both sleep in earplugs. I don't understand how anyone can sleep in a hotel without earplugs. We weren't bothered by other guests walking down the hall.) The bathroom was spacious with plenty of counter space for makeup bags, hair tools and dopp kits. Also there was a nightlight in the bathroom, which is genius.

Our first night in Seattle after a long day of travel, we walked down Roy Street less than a block from the hotel to Bamboo Garden Vegetarian Cuisine. The fake meat balls that came with my Sesame "Chick'n" and with Chad's Sweet and Sour "Pork" dishes were delicious, but really dense. While we're always delighted to find a vegetarian restaurant when traveling, this restaurant's dishes would benefit from more vegetable and fruit ingredients to balance the density of the fake meat products.

A bit jet-lagged and both in varying stages of a shared head-cold (thanks to Chad's germs) we retired early to our comfortable hotel room.

Our first full day in Seattle, Chad woke up before I did. Using his super-power of getting ready really fast, he headed downstairs for breakfast. The Maxwell Hotel offers ready-made breakfast items such as breakfast sandwiches, yogurt and baked goods for purchase. Chad brought a bagel and fruit cup back to the room for me just as I finished putting on my make-up and getting dressed. Yes, I'm spoiled. (In the interest of equal partnerships, please note that I did all the research and planning for our vacation, as I do for most of our trips.)

After my breakfast and morning cup of tea, we easily walked to the Chihuly Garden and Glass at Seattle Center. Regular readers know my love of all things Chihuly glass! These exhibits and installations are gorgeous, magnificent and breathtaking. There are many rooms, halls, soaring spaces and garden settings to explore here. Chad and I both marveled at all of it. My photos don't do it justice. If you ever have opportunity to see Chihuly exhibits or installations, you must go! 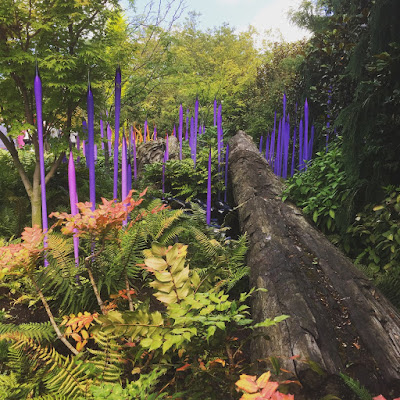 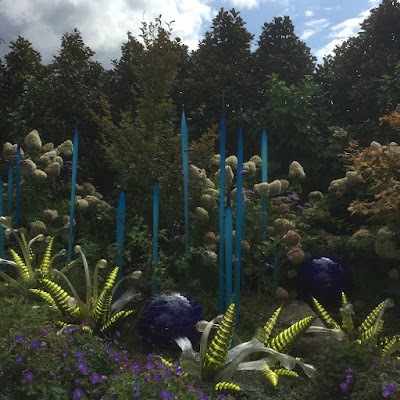 We took advantage of a discounted bundled admission ticket to visit the Seattle Space Needle after gawping at the beautiful Chihuly art glass. During our first visit to Seattle together many years ago, one of our friends from college graciously showed us around Seattle. He forbade us from going to the Space Needle. He decided it was for tourists and silly. We tried to argue that we were tourists, but our friend still said no. On this trip to Seattle, we could see the Space Needle from our hotel room window. It beckoned. We couldn't resist. While walking up the ramp to the elevator for the observation deck, we read about the history, engineering and construction of the Space Needle for the 1962 Seattle World's Fair. The elevator traveled quickly to the observation deck level, reaching an altitude of 520 feet in 41 seconds. As the elevator doors opened we were walloped by the smell of a diner serving hash browns, waffles and burnt coffee. Um, no thanks. The views outside on the observation deck of rooftops and other skyscrapers were interesting, but not awe inspiring. Thanks to clear sunny skies, we saw Mount Rainier in the distance. Yep, there it was. In its day, I'm sure the Space Needle was way impressive, but with all of today's high rise buildings and air travel, not so much. The Space Needle feels kitschy and retro-futurist like an episode of The Jetsons cartoon. Maybe skip this tourist activity if you're on a limited budget. Definitely explore Seattle Center. The day we visited a Hawaiian festival featured food trucks, hula dancers and Hawaiian music. We also enjoyed watching joyful kids and an unfortunate group of boot camp exercisers run around in the big water feature area.

We returned to the hotel for Chad's afternoon nap and my stare at my phone time. 75 minutes later, both rejuvenated, we went to a late lunch at The Rock Wood Fired Pizza Kitchen on the ground floor of Maxwell Hotel. Do you love sports? I don't, which is probably a big part of why I failed to appreciate The Rock. Giant televisions every ten feet broadcasting sports loudly. I drank lemonade at 2:00 in the afternoon, but the table tent promotions hawked beers and buckets of margaritas, yes buckets! The service was friendly and efficient. The pizza was not so good. Maybe after a bucket of margaritas that pizza tastes better? My bad for not researching the restaurant more, and for going somewhere that was not my scene.

After lunch we hopped in an Uber carpool to head downtown so we could ogle the Seattle Public Library Main Branch. Wow! We marveled at the glass and steel beauty from the outside and from the inside. The library houses a small gift shop and coffee bar inside. There are many comfortable chairs and sofas upon which to sit and read in the abundance of natural light that the glass walls invite. An open atrium allows peeks at the stacks in the upper levels of the library. Librarians sit ready to assist with everything from periodicals to young adult literature. This library is not just an architectural marvel, but also very inviting. If I lived in Seattle, I'd spend much time here. 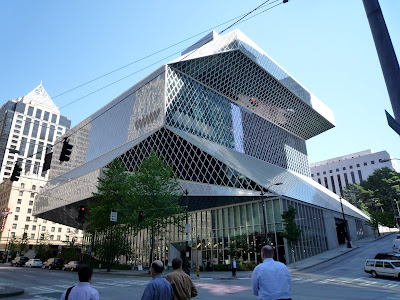 Next we decided to hoof it a few blocks to The Underground Tour. Did you know that most of Seattle was destroyed by a giant fire in the early days of settlement? I had a vague notion of this based on a Scooby Doo cartoon (true tidbit), and wanted to learn more. Our tour began with a humorous and informative history lesson about Seattle's early leaders and industries. The tour group visited several underground spots learning about the great fire's effects on the culture, engineering and rebuilding of Seattle. Being in the old underground spaces felt like a little adventure, like seeing secrets behind the curtain. I was particularly interested to learn that the "seamstress" (a.k.a. negotiable affections worker) wage tax funded most of the reconstruction of Seattle after the great fire. The tour dealt with adult subject matter in a winking, semi-respectful manner. The tour may not be the history lesson that children need to hear, but as an adult, I loved it.

After the tour we surfaced above ground to daylight and massive crowds as a Seattle Seahawks football game just ended. Thanks to the nice weather coupled with the human and automotive traffic jam, we decided to walk back to the Maxwell Hotel. We walked past the Public Market. We saw the waterfront. We met a few dogs out for their walks. Some Scientologists offered us a free lecture. Just say no! After 45 minutes of hilly walking, we had a good workout.

At this point we were understandably tired, and just wanted to relax. We ate leftovers from the previous night's dinner at Bamboo Garden as we watched a few episodes of syndicated The Big Bang Theory on television. Neither of us wanted the leftover pizza from The Rock, because really, it was not so good.

Tune in at some point in the near future to read more travelogue from Seattle and San Juan Island.