Five Highlights from 48 Hours in Houston

I attended the TRIO for Paws fundraiser back in September at the Four Seasons Hotel in Austin on the shores of lovely Lady Bird Lake. The event raised money for Emancipet, Austin Pets Alive! and Austin Humane Society. There were cute adoptable puppies, a silent auction, live music, yummy passed hors d'oeuvres and information tables for each of the beneficiary nonprofit pet groups. I experienced a cute puppy, beautiful setting, feel-good pet rescue haze when I repeatedly bid on, and ultimately won, a weekend stay in an Executive Suite at Four Seasons Hotel Houston as part of the silent auction. Many thanks to the Four Seasons Hotel for hosting this event and for donating generous silent auction items!

Chad and I finally used our gift certificate last weekend in Houston. The Executive Suite is huge at over 700 square feet! The bedding is plush. The Four Seasons Hotel Houston is located conveniently near the convention center, Toyota Center stadium and Discovery Green park. Here are five highlights from our 48 hours in Houston. 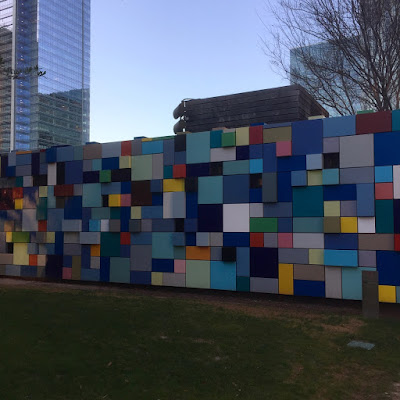 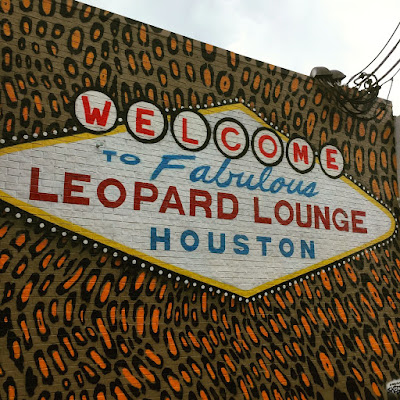 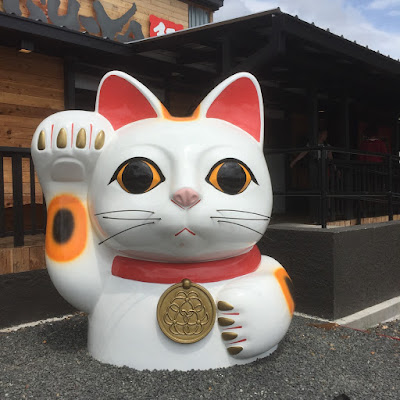 Montrose is a mostly residential neighborhood in Houston with a mix of old bungalows, historic mansions and some modern construction. The area also boasts many thrift & vintage shops, fabulously funky stores, with huge colorful wall murals on businesses and restaurants along Westheimer Road. We wanted to see the wonderful weirdness that defines Montrose before it's all priced-out of the rapidly gentrifying area. It was imperative that I snap several photos of this humongous lucky kitty outside of the Ramen Tatsu-Ya restaurant! There's a person on the porch behind the kitty to give you a sense of scale. I especially enjoyed shopping in Merchant and Market, procuring a lovely beaded vintage handbag there.

3. Kuhl-Lindscomb bills itself as a design and lifestyle store. This sprawling campus of a department store is a visual feast. We didn't buy anything here, but spent an hour gawping at every well-curated corner of the place. Just wow! We also met Bandit, the prosperous ebony shop-cat who lives in the kitchens and bath showroom building. I failed to snap a photo of that lucky kitty.

4. Panic! at the Disco concert at Toyota Center

Houston's Toyota Center is the giant stadium where the NBA's Houston Rockets play basketball. It also hosts music concerts. The venue can seat over 18,000 people. Our seats were in the nose-bleed section. I get vertigo in the cheap seats of large stadiums. I feel dizzy and my ears ring. I seriously considered sitting on my bottom like a toddler and scooting down the steep stairs to our seats, but I kept it together with a white-knuckle grip on the stair rail. Chad and I seemed to be the only people over the age of 30 at the concert who were not either working there or accompanying teenagers to the show. In other words, we were surrounded by ten-thousand screaming teenage girls (and a few teenage boys) who knew every word to every song. Fine. Over it. Panic! at the Disco put on an amazing show complete with glitter canons, metallic streamers, pyrotechnics and a baby grand piano that rose 20 feet above the crowd and rotated as lead singer Brendon Urie played piano and sang "This is Gospel" beautifully. We had a great time! 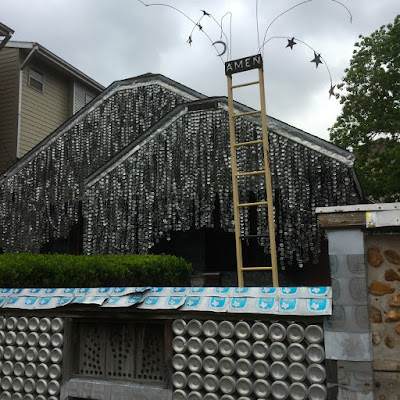 Located at 222 Malone Street in Houston, the beer can house began in 1968 when a retired upholsterer, John Milkovisch, started to cover his yard with concrete, marbles and bits of metal forming mosaics, because he didn't want to mow the lawn any longer. Then he turned his attention to the house, and started covering it with beer cans. The estimated 50,000 beer cans provided insulation for the home and increased the energy efficiency. Mr. Milkovisch considered his beer can projects to be a fun hobby, not works of art or a statement. He did enjoy people's reactions to the home as they drove by or strolled by. The home is now maintained by the Orange Show Center for Visionary Art. If you find yourself in Houston, definitely see this marvelous place!