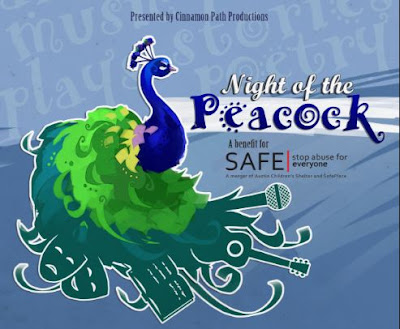 For those of you unable to attend Night of the Peacock last Sunday evening at Mayfield Park, I'm posting a transcript of the peacock-themed story I told. The variety show, produced by my friend Max Langert, raised nearly $1100 for SAFE Alliance. The nineteen resident peacocks of Mayfield Park were just as much part of the show as the musicians, poet, storytellers and actors were. The peacock squawks and struts punctuated the human performances with genius comedic timing. The huge trees and tranquil ponds at Mayfield Park provided a beautiful backdrop. I'm thankful for creative, driven and talented friends who ask me to be part of their shows.

About ten years ago, I worked as a background actor in film, television and commercials. You may recognize me as a recurring featured extra from season three of Friday Night Lights. You may recognize me as the airline stewardess who bumped shoulders with Temple Grandin as played by Claire Danes in the Emmy-award winning, HBO-produced movie entitled Temple Grandin. You may recognize my hands from twirling pasta in Carino’s Italian Grill commercials. Some of my fellow actors back in the day would complain bitterly about getting casting notices for reality television shows. I hate to be the one to break it to you if you didn’t already know, but there isn’t much real about reality television. There was a particularly odious reality TV show called "The Pickup Artist”. Many of my female friends, some of them happily married, were summoned by their talent agents to appear on this not-so-real reality show.

The premise of The Pickup Artist was that a guy, who claimed to be suave and debonair, coached men who were unlucky in love, on the shady art of picking up women. The main coach-guy called himself Mystery. Mystery looked like he took fashion advice from both an evil magician and a pirate. A typical outfit for Mystery might include knee-high boots, a puffy shirt, a crushed velvet cape and a fuzzy top hat. The real mystery is how this awful show ever got the green light. "The Pickup Artist" promoted several pickup tactics: Peacocking entails dressing oddly or flamboyantly to call attention to oneself. The "neg” involves giving back-handed compliments mixed with a little insult to get a lady’s attention and deal a blow to her self-esteem. For example: “You’re pretty, but you’d be really gorgeous if you lost ten pounds.” Who wouldn’t be charmed, right? Pickup artists also coach persistence. If a lady initially rebuffs a pickup artist, he keeps trying to get her attention, or starts hitting on her friends.

Around the time this reprehensible reality TV show was on the air, I attended weekly pub trivia nights with a group of friends at Mother Egan’s Pub. I was usually the team secretary, recording our answers and walking our answer sheet up to the front of the pub for scoring after each round of trivia questions.

On this particular night, after one of the rounds of trivia, I walked our team’s answer sheet up to the front scorekeeper's table. When I turned to rejoin my team at the back of the pub, there was a little boy blocking my path. He wore a rainbow-striped baseball cap with a small, red propeller on top of the hat.  I thought, “This is weird. Why is this little boy in a bar? On a school night? Why is he wearing that silly hat? Is it punishment for something bad he did?” He looked kind of scared, but stood his ground, directly in my path.

“Excuse me,” I said, and stepped to one side, hoping he would step to the opposite side, and we could pass each other. Instead, he gave me a slow visual appraisal, looking down the length of my person and back up to my face. He locked eyes with me, and said, “Hi” in a squeaky voice. He cleared his throat, and tried again, and said, “Hi” with a slightly deeper voice this time.

The longer I looked at this scared little boy blocking my path, the more the alarm bells started sounding in my head. I realized he was not a little boy, but an adult male with a slight build and terribly timid posture. I also clued in that the weird hat was likely an attempt at peacocking. I worried if I stood there much longer I might be subjected to the full “Pickup Artist” routine about which my actress friends had warned me. I didn’t want to be mean, but I was (& am) happily married, and just not at all interested in striking up a friendship with any adult who wears a rainbow-striped baseball cap with a small red propeller on top. So I said, “I’ve got to get back to my team for the next round of trivia. Have a good night.” I gave a little wave, turned the other way, and found a new path back to my team’s table.

I’d love to tell you that I politely and firmly rebuffed Rainbow-Propeller-Hat on my own in a blaze of feminist glory, but that’s not what happened. Instead, I winked at my husband, who was sitting across the table from me. I then turned to Rainbow-Propeller-Hat and said, “This is my husband, Chad. Stand up and introduce yourself, babe.” My husband is one of the least jealous, most polite people you’ll ever meet. He also happens to be six-feet tall, and he lifts weights.

Chad stood up. That’s all it took. Rainbow-Propeller-Hat wouldn’t even look my husband in the eye, but mumbled, “Hey man, Do you know where the bathrooms are?” My ever-polite husband pointed in the general direction of the bathrooms. Rainbow-Propeller-Hat made a hasty departure, with his little red propeller spinning in the wind, thus salvaging some tiny shred of dignity. Okay, no, that’s a lie. When a person is peacocking, and doesn’t have the sense of self-worth or sense of humor to back it up, dignity goes out the window real fast. I felt bad for Rainbow-Propeller-Hat, that he couldn’t just be himself and strike up an honest conversation with someone. I felt really mad at shows like "The Pickup Artist” for preying on lonely people, and for giving terrible advice like peacocking for pick-ups, the “neg” and persistence when one should not persist. Apparently many people shared my opinion, because “The Pickup Artist” received much bad publicity and public backlash. “The Pickup Artist” was canceled after only 16 episodes, no longer besmirching the proud name of the majestic peacock.