I had a birthday. Chad needs a root canal.


The Wednesday before my birthday featured a tough session at the gym with my sweet, pretty, perky trainer (who is trying to kill me with lunges, squats, planks and push-ups), lots of household chores and a trip to the grocery store to prepare for the celebrations (and laziness) to come. Thursday morning Chad and I hit the road at the crack of 9:00 AM. (That's early for me. #ChronoDelayed) Destination: Dallas, first stop: lunch at Unleavened Fresh Kitchen. Being a vegetarian on the road in unfamiliar places presents a challenge. While a few chain restaurants offer veggie options, I don't always (as in hardly ever) want to eat at Subway or Chipotle. I research online ahead of time for viable veggie food. Unleavened Fresh Kitchen hit the spot with the Gardener Wrap -- yum! Bonus points for location near our next stop: Dallas Arboretum & Botanical Garden. I was so looking forward to seeing the eleventy-billion pumpkins and gourds. The displays were amazing. But I won't lie, the hot weather and blinding sun were a major fall weather fail. Chad and I skulked from shady spot to shady spot, cutting our time at the gardens short due to sunburn risk and heat exhaustion. Enjoy the photos. Know that I was sweaty and growing increasingly irritable when I took them. 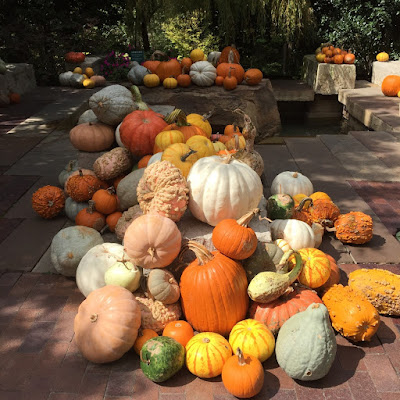 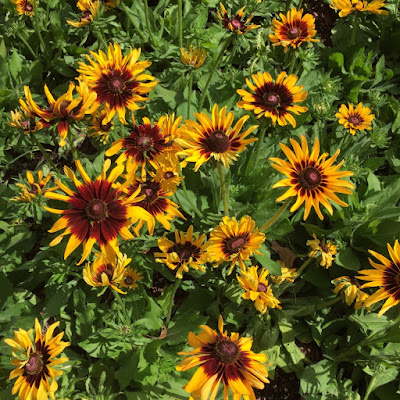 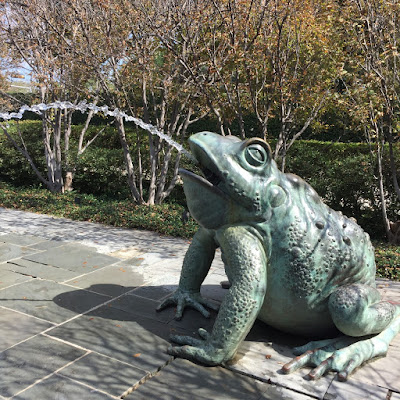 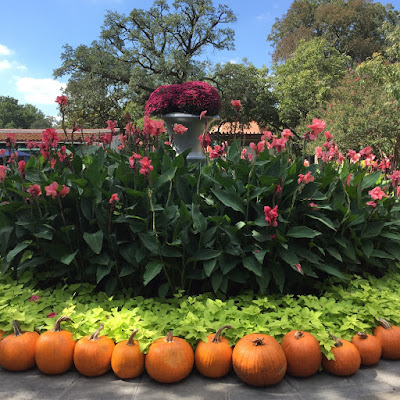 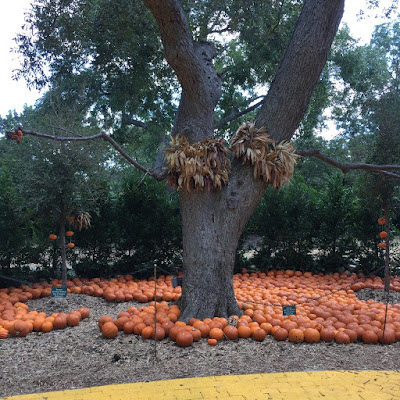 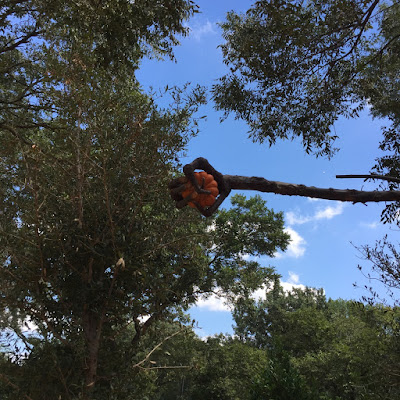 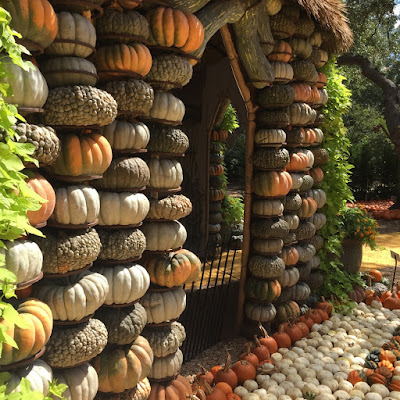 We traded the blinding sun and sweat-inducing heat of Dallas Arboretum and Botanical Garden for the sweet shade and air-conditioning of the Dallas Museum of Art. We specifically visited the museum to experience the Kusama installation art piece entitled All the Eternal Love I Have for Pumpkins.  Call me skeptical about standing in a mirrored box with polka-dotted pumpkin sculptures for 45 seconds, but it turned out to be emotionally affecting to see these joyful pumpkins reflected forever and ever and ever. The optical illusion of eternal pumpkins also left me feeling a bit wobbly physically. I think the artist knew what she was doing by limiting exposure to 45 seconds. If you go, I strongly encourage you to buy tickets to this special exhibit ahead of time. Chad and I wandered the museum for hours. I do love Dallas Museum of Art.


As I shamefully admitted on this very blog several months ago, Chad and I fell off the vegan wagon. We're just vegetarian with vegan tendencies now. With that out of the way, our last stop in Dallas: dinner at Cane Rosso in Deep Ellum. We shared salad, focaccia and an outstanding Margherita pizza. There was cheese and it was delicious. I'm sorry, cows. Thank you, cows. 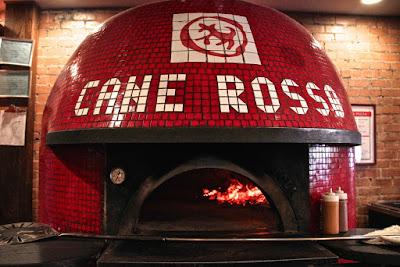 We managed to wait out most of the rush hour traffic before hitting the road back to Austin. After some bothersome lane closures due to roadwork, we were home safe & sound by 10:30 PM.

Friday morning I awoke to donuts from Bougie's delivered by a handsome, hunky man. (It was Chad.) Wow. (The donuts and the Chad.) We went halfsies on a lavender donut and a cinnamon donut. Both cake style donuts were exemplary. I highly recommend.

After some relaxed Internet time and lolling about, we stepped out for lunch not too far from home at El Mercado (a.k.a. Old Reliable). Veggie fajitas and a daytime margarita were all I hoped they would be. Many times while dining at El Mercado on Burnet Road, I've looked across the street and spied the sign for Chocolaterie Tessa. With birthday-weekend momentum building we finally visited Chocolaterie Tessa for the first time. The smell of chocolate gently beckoned us inside while the spare, tasteful displays offer glimpses of chocolatey goodness. We procured six truffles to share, each more heavenly than the next.

In the spirit of trying new things we also popped in to a store in our neighborhood that we'd not yet visited. Magic Caravan at 5003 Burnet Road lives up to its name. Gorgeous rugs, fancy pillow covers, intricately painted ceramics, exotic jewelry, Turkish towels, robes and colorful light fixtures delighted us. Plus I got to meet the shop dogs who were sweet and beautiful, so major bonus points there. I exercised great restraint, buying only three colorful handmade ceramic bowls. Great restraint.

Chad and I went to see a movie in the middle of a weekday. So decadent. We saw Flatliners (the 2017 re-do). Meh. Then we hit Trader Joes's where I bought everything that looked good. The bill came in under $59. What?! I should go to Trader Joe's more, but it's a bit of a trek from our house.

Saturday morning I spied with my little eye this lovely birthday tablescape. (Even though my birthday wasn't until Sunday, Chad set the scene early.) Chad made yummy brunch for us which included killer French toast. We did our best imitations of sloths all day. We had leftover veggie fajitas for linner. (Linner = lunch + dinner.) We had birthday cake a little early. We're so crazy! (Note the sarcasm. We are fairly mild-mannered and polite folk.) 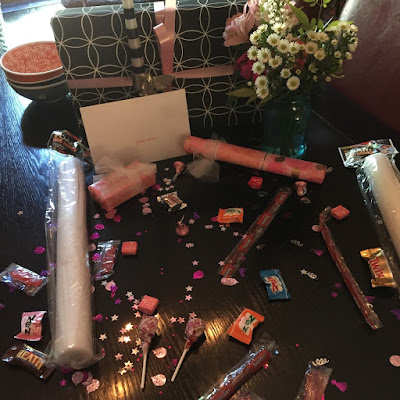 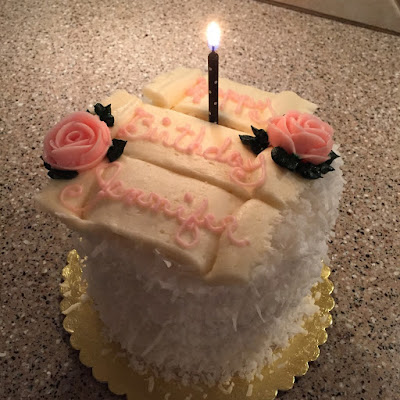 Sunday, officially my birthday, we brunched at Blue Star Cafeteria: the only place in town to get good grits. After brunch the weather was brutally hot and sunny for what was supposed to be a fall day. And Austin City Limits music festival made most of Central Austin a no-go-zone. So we scurried home to hide from the elements and crowds. I opened presents. I am now the proud owner of a Kenzo sweatshirt. I try to be all "live simply so that others may simply live", but in my heart of hearts, I lusted for that colorful Kenzo sweatshirt something fierce. My precious.

Sunday afternoon, Chad took his usual weekend day siesta. He seemed distracted. After some gentle questioning, he admitted to a toothache. We thought it was sinus pressure from seasonal allergies making his tooth hurt as it was sinus-adjacent. After three and a half days of birthday debauchery (kidding), things kind of fizzled out by Sunday evening (not kidding). We ate Trader Joe's salads for dinner. Chad went to bed way early.

Monday Chad's tooth was hurting even more. He googled and self-diagnosed that he probably bruised a ligament in his jaw due to sinus pressure. (Public Service Announcement: do not google and self-diagnose. You'll be wrong.) I went to my workout Monday morning and to Spanish class Monday evening. Chad did not sleep well Monday night.

Tuesday Chad's upper jaw and tooth were still in a real bad state. I rubbed his shoulders between doing loads of laundry to try and distract him from the pain. We met up with Chad's brother, who happened to be in town for his work, for dinner. Chad put on a brave face for his brother, but agreed to see a dentist Wednesday, so I know the pain must have been terrible. Chad did not sleep much Tuesday night.

Wednesday morning Chad awoke to a swollen upper lip. At his 8:00 AM dentist appointment, the doctor diagnosed a serious infection and a need for a root canal. After an initial treatment, and a prescription for good pain meds and antibiotics, Chad should be on the mend. Only, he's not. If anything, the swelling is worse and has spread up to his nose and cheeks. I'm so worried about him. He looks miserable and awful. I offered to take him to an urgent care clinic, but he declined.

I'm marching him back to the dentist tomorrow if things don't look better in the morning. Send prayers and happy, healing thoughts.