We took the tube to King's Cross Train Station to catch the express train to Cambridge from London. The train ride took just under an hour, and was not very scenic, unless you think cows are scenic. When our train passed another train, the air pressure made my ears pop, and made a loud "whoosh" noise. Upon arrival in Cambridge, we were greeted by literally hundreds of bicycles locked to bike racks just outside the station. We were also greeted by rain. At this point in my trip to England, the novelty of the rain wore thin. Chad and I walked the quaint roads for about fifteen minutes to the visitor's center. A video about Cambridge ran on a loop in a strange little theater made to look like a courtroom complete with bewigged mannequins in barrister robes. Why the tourist video ran in a mock courtroom, I have no idea.

Down the hall, we entered a fluorescent lit room with a few employees seated at desks behind glass partitions. This room was reminiscent of the Department of Motor Vehicles in most American cities. We bought tickets for a punting tour later that day. We exited through the only available door which deposited visitors into a jam-packed gift shop - clever, Cambridge Tourism Council!

On our way to the punting tour pickup, we passed an intriguing cricket clock sculpture in a large window. A quick google revealed this to be the Corpus Clock or Chronophage (time-eater) as the creator calls it. Watching the beautiful clock tick off seconds and minutes mesmerized me, but we needed to keep moving. 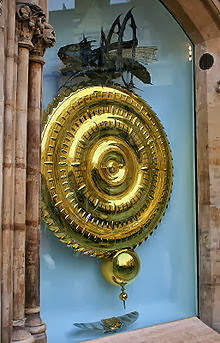 On the Cambridge tourism website, I read that having a Chelsea Bun is a requisite part of any visit. We ducked into Fitzbillie's and ordered a Chelsea Bun full of honey (rather than the traditional sugar glaze) and currants along with hot tea served English style with a splash of milk to take with us to the punting tour dock. A bee hovered around our Chelsea Bun as if to demand his stolen honey be returned. Sorry, bee, but the bun was too yummy. 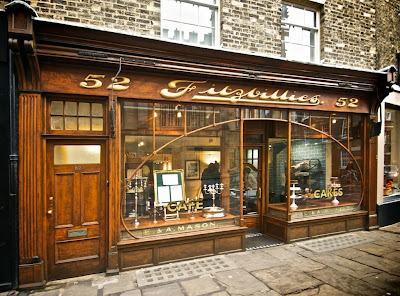 At the appointed time, we climbed into the Scudamore's punting tour boat, covered up with a blanket and popped open our umbrellas. (Still raining.) A punting tour involves a flat-bottom-boat navigated by the tour guide down the River Cam with a long pole pushed along the river bed. If you've been to Venice, it's sort of like the gondoliers, but the boat is more shallow. We saw lovely 16th and 17th century architecture on most of the college buildings of Cambridge. We heard about the history of the area. We saw Cambridge's Bridge of Sighs, which is much less grand than Venice's Bridge of Sighs, but pretty. We also heard about Cambridge college student shenanigans through the ages. If you go to Cambridge, you must take a punting tour to see some of the best views and hear the best gossip.

After the punting tour, we had a date with one of Chad's English coworkers at the Eagle pub. Chad's coworker initially asked that we meet him at the low wall outside of King's College next to the conker tree, but then texted that if it was raining we should meet at the Eagle pub. Um, what is a conker tree? How rainy is raining? Chad texted back that we'd meet at the Eagle rain or shine. The Eagle pub was a welcome escape from the chilly, drippy weather. It felt like a quintessential English pub with pretty woodwork and a little authentic sticky grime about it. We ordered food without waiting for Chad's friend, because we were hungry. Chad had a generous serving of mushroom ravioli. I had a black bean and jalapeno veggie burger. This was one of the better meals I enjoyed on our England trip. I'm sorry to say that English food is neither bold in flavor or imagination, and seems to center around salted beef, mashed peas, fried fish and chips (like soggy, unseasoned french fries in American terms). Chad's friend arrived quite late -- good thing we decided to meet inside the Eagle and not at the infamous conker tree where that albino squirrel once lived near the low wall outside King's College.

Chad's friend gave us a brief walking tour with the bit of daylight that remained. Central Cambridge's cobblestone streets are lined with sweets shops, tea rooms, pubs, and a few quaint clothing stores. The whole effect coupled with drippy rain charms one into a sleepy, cozy state. We ended our tour at Jesus Green - a giant green space park running along the river shore.

We took a cab to Cambridge Train Station for the train to King's Cross Train Station, then across the street to the tube to London Bridge tube station, and another fifteen minute walk back to our south London apartment. Navigating without a car is possible, but not terribly convenient, and gets pricey. Chad especially missed driving his fun two-seat car. I'm on the fence about a car-less lifestyle. I think I could do it in London, New York or Seattle, but not in Austin.

Tomorrow I'll fill you in on more London tourist activities and gawking.