Chad and I agreed that Monday called for much less walking than Sunday, and that we didn't want to go anywhere with Circus in the name, like Piccadilly Circus or Oxford Circus, again.

Monday was rainy. Not just drippy or drizzly, but raining cats and dogs rainy. We walked fifteen minutes to the London Bridge tube station, surfacing at the Houses of Parliament which is just across the street from Westminster Abbey. Chad and I were each armed with our own umbrellas, but still got wet. People without umbrellas looked like drowned rats, bless their hearts. 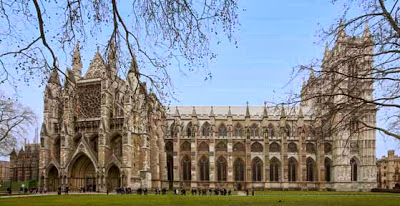 Westminster Abbey is huge and awe-inspiring. We easily spent two hours admiring the Gothic architecture and reading the memorial plaques. It's on the those you must see it for yourself places. Everything is varying shades of grey stone with a few wood railings and doors, except for the stained glass windows which are brilliant jewel tones. I especially enjoyed the Poet's Corner section where some English authors are buried and where many English authors have memorial plaques. It's amazing that the structure survived the bombings of World War II. Many of the windows had to be replaced. There are pockmarks in the exterior walls bearing witness to such a frightening time in history.

We caught the tube back to London Bridge station which spit us out very near Burough Market. On Mondays, only a few stalls are open. We ate spicy falafel pitas for lunch on a bench out of the rain. Then we bought some cheese, nuts and baked goods for later. The rain let up enough for us to walk back to the apartment. We rested and watched some English telly, while planning our day trip to Cambridge for Tuesday.

Dinner Monday night was at Pizza Express - a chain place that was okay, but nothing special. What was special was walking along the Thames after dinner and gawking at the beautiful Tower Bridge. Chad joked that each tower looks like Cinderella's castle from Disneyworld, and it does look like something from a very stylish fairy tale. The huge metal rails of the bridge are painted peacock blue, the Queen's favorite color, which happens to be my favorite color too.

Tomorrow read all about idyllic Cambridge.