Pantone's 2014 color of the year is radiant orchid. I had some purple sugar sprinkles in the cabinet (bought for what, I haven't a clue), and decided that they are radiant orchid. I'm so fashion forward that way. I had to bake something on which to sprinkle the radiant orchid sugars: vanilla cupcakes with vanilla cream frosting. The cupcakes made use of almond extract while the frosting used vanilla extract, whipping cream, butter and powdered sugar. The recipe tasted good, but I'd like to try the recipe again with fresh lemon zest and juice in place of the extracts. I wonder if lemon juice will make the whipping cream curdle. I'm trying out some frosting methods with my new piping bag and tips. Admittedly, some cupcakes looked better than others. 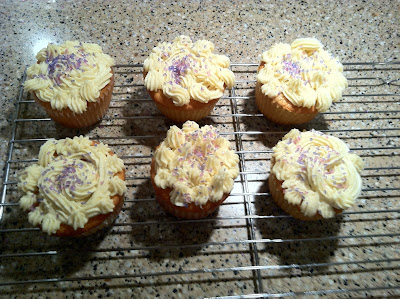 In other news, after working full-time without full-time benefits for approximately eight months at my retail visuals job, my scheduled work hours drastically reduced the past six weeks, typically working only five to fourteen hours per week. The past two weeks, I've been scheduled zero hours with two or three on-call shifts. On-call shifts irritate me greatly. Workers are obligated to call the store two hours before their scheduled on-call shifts to see if they are actually working or not. It's a way for employers to reserve an employee's time (or hold your time hostage as I like to say) without paying employees for that time and without guaranteeing any work during that time. My immediate supervisor (bless her!) took pity on me, and verbally gave me a five hour shift for this week.

Part of me thinks I should enjoy these reduced hour work weeks, because it leaves more time to bake, read, exercise, do chores and take tiling classes at the Home Depot. (I took a kitchen and bathroom tiling class Sunday. The teacher said I'm a natural.) Part of me sees the economic reality of working more hours per week if Chad and I ever want to take another vacation and/or want to pay off the mortgage early. Both of which we definitely want to do.

Stay tuned for probable job search hijinks in the near future.